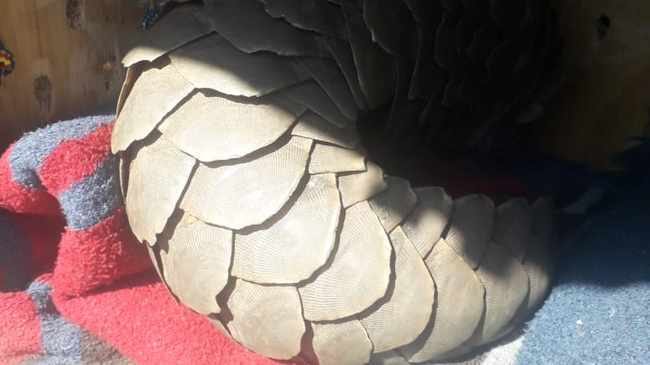 Three suspects are expected to appear in court in the North West on Monday for possession of an endangered pangolin. Photo: (Original photo as supplied [SAPS] and published on IoL.)

Brits – Three people, aged between 22 and 35, are expected to appear in the Brits Magistrates’ Court on Monday on charges of contravening the National Environmental Management: Biodiversity Act (NEMBA), the South African Police Service in the North West said.

The suspects’ court appearance emanated from their apprehension at about 12.30pm on Friday at a petrol filling station near Alpha Crossing in Brits for being in possession of a highly endangered pangolin, North West SAPS spokesperson Maria Nkabinde said in a statement.

“That was after a possible pangolin sale tip-off was received from a member of a non-profit organisation (NPO) responsible for combatting illegal trade of wildlife and endangered species,” she said.

The suspects were arrested after failing to account for their possession of a pangolin. The investigation into the matter was continuing, Nkabinde said.

Last month, it was reported that four pangolins had been rescued from illegal traffickers in just over a week in sting operations across the country. Three of the pangolins were pregnant, the Saturday Star reported.

During the operations, 11 people were arrested by a team of dedicated and specialised law enforcement officers. At the time, Ray Jansen of the African Pangolin Working Group said pangolin poaching had resumed after the coronavirus (Covid-19) lockdown was eased.

Pangolins are the most heavily trafficked mammal on the planet and rank among the most trafficked wildlife species on the African continent. The demand largely for their keratinous scales, used in traditional Chinese medicine (TCM), and for their meat in southeast Asia has created a lucrative illicit market run by transnational criminal syndicates, the newspaper reported.