By NewsroomApril 14, 2020Conservation, Education
No Comments

Like any other Malaysian now, Lydia Lubon is staying at home obeying the movement control order (MCO).

“(My life) completely revolves around working online, connecting with friends and colleagues on social media, and thinking about what to make for breakfast, lunch and dinner. Work and makan, the pillars of Malaysian society!” she says in jest.

However, the Malaysian documentary filmmaker and environmental educator is serious about the fact that overcoming the Covid-19 pandemic is a social responsibility.

“It’s natural to want to ensure one’s own survival and comfort in challenging times like this, but if we only think and act as individuals, then the effect on society would be disastrous,” she says.

“For example, if we panic buy more than what we need, others might not have enough, or if we go out unnecessarily, we are endangering the lives of others as well as our own.” 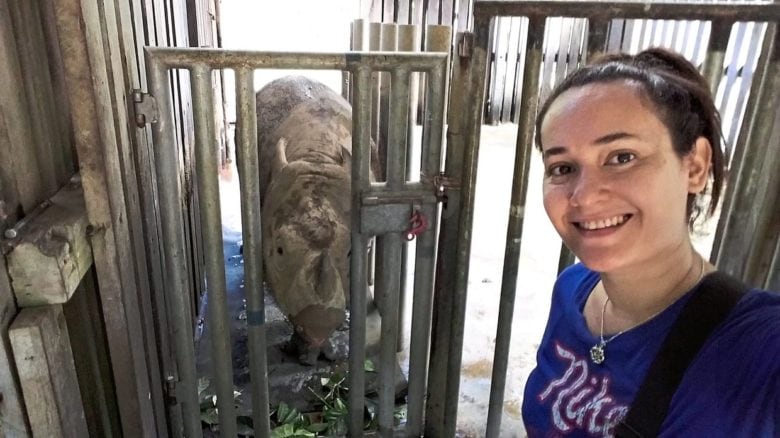 Original image as posted by The Star: Among Lubon’s work was “Operation Sumatran Rhino” (2016), a National Geographic wildlife documentary on Malaysia’s last Sumatran rhinos that is still being aired today. Photos: Lydia Lubon

Lubon emphasises that everyone needs to cooperate as a community in following the social distancing guidelines set by the World Health Organization and adhere to the MCO decreed by the Malaysian government.

It is not surprising that Lubon, 41, feels so strongly about this. Above her many achievements in the field of filmmaking and environmental conservation, closest to her heart is the issue of social responsibility.

The Sarawakian, of Iban-American parentage, has worked on several documentary shoots in East Malaysia for big names like Al Jazeera, National Geographic and Unicef.

She is currently attached to the Free Tree Society, an environmental organisation that provides free educational programmes (such as waste management, gardening and rainwater harvesting) to the public on sustainable living.

“The MCO is an extremely challenging time for all, including myself. Both my passions as a filmmaker and an environmental educator involve a great deal of social engagement and working in teams, and right now, that’s exactly what we’re not allowed to do,” she says.

However, she adds that there is no better time to think of ways to be of service to others through her work and personal life.

“Whether it’s posting inspiring, educational or funny videos online, or not panic buying, I do my best to be socially responsible. And I hope others will do the same too, so that we can all get through this pandemic situation successfully.”

Lubon, whose favourite class in school was art, has always been a creative person. It was only natural that she wanted to make a difference in the world through the art of moving visuals.

She first ventured into the world of filmmaking at the age of 24, straight out of university (in Denver, Colorado, the United States), as an intern for an Animal Planet series shot at the Singapore Zoo.

“I fell in love with documentary filmmaking and have been producing documentaries ever since,” she shares.

Lubon loves real stories about social issues with real people and the challenges they face.

“These are so much more fascinating than fiction,” she enthuses.

“After watching countless documentaries on Astro in my early 20s, I realised that TV documentaries were one of the most powerful tools for raising awareness among the masses about social issues, the environment or wildlife conservation,” she explains.

In 2016, she worked on Operation Sumatran Rhino, a wildlife documentary for National Geographic about Malaysia’s last Sumatran rhinos and the conservationists in Sabah who were working against time trying to save them. It aired worldwide in over 150 countries and is still showing on Astro and around the world today.

“The documentary and wildlife extinction is still as relevant today as it was three years ago. Extinction happens every single day on our planet and it isn’t stopping any time soon,” she stresses.

Malaysia’s last Sumatran rhinos have all passed on, with the last one named Tam dying in November 2019.

“It was an incredibly humbling experience to see what extinction really looks like because I watched it happen over three years during the production of the documentary.”

Because of her work on wildlife documentaries, she became involved in more and more conversations about environmental conservation.

“The more I screened this documentary to the public, the more I realised I wanted to be part of this conversation on a daily basis rather than just at my film screenings,” she explains.

That was what led to Lubon joining the Free Tree Society this year.

The NGO offers several programmes, including: On the Go (environmental education and skills training programme for students and teachers), Rewilding (growing home ecosystems to sustain oneself and support biodiversity), Bangsar Nursery and Taman Tugu Nursery.

Lubon admits that doing hands-on outdoor environmental work is very different from producing a documentary, where 80% of the time is spent sitting in front of a computer writing proposals, editing scripts or researching story ideas.

“I had no idea how physically difficult outdoor work and gardening was. It’s a huge adjustment from filmmaking but I absolutely love it.

“I love being in nature every day, getting my hands dirty and helping fellow Malaysians appreciate our planet and wildlife a little bit more,” she says.

The purposeful producer recently directed a shoot about inspiring women in South-East Asia who are challenging social norms.

“It’s a great initiative by Germany’s International Public Broadcaster, DW, and the series is entitled, Her Perspective.”

Lubon notes that one of the highlights of her career was having renowned English primatologist and anthropologist Dr Jane Goodall attend a special screening of her documentary in Kuala Lumpur.

“As a wildlife conservation filmmaker, it doesn’t get better than that!” she exclaims.