By NewsroomFebruary 8, 2020Anti-poaching, Conservation
No Comments

Former Minister of Environment, Wildlife and Tourism (MEWT) Tshekedi Khama has blamed skyrocketing incidents of poaching, where 39 rhinos have already been killed in the Okavango Delta, on ‘poor’ decisions by President Mokgweetsi Masisi.

Specifically, Tshekedi put the blame on the disarmament of the Department of Wildlife and National Parks (DWNP) anti-poaching unit and dismantling of the Wildlife Intelligence Unit by government last year. In an exclusive interview, Tshekedi said the disarmament of the DWNP Anti-Poaching Unit has overburdened the Botswana Defence Force’s (BDF) Anti-Poaching Unit who are now the only disciplined force guarding the country’s fauna. “We had the best intelligence unit in the country and the only wildlife intelligence unit in Africa specializing on wildlife. The reason they were the best is because they solely focused on wildlife and managed to contain poaching in the country,” he said. 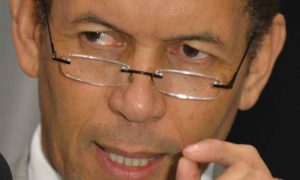 Original photo as published by The Patriot: Former Minister of Environment, Wildlife and Tourism Tshekedi Khama.

He said DWNP Anti-Poaching Unit (APU) was well equipped and could detect any threat to the wildlife and with the collaboration with other law enforcement agencies they managed to contain poaching. “That is why in 2017 through our intelligence unit we managed to arrest DIS officers at Makalamabedi with ivory which they failed to account for,” he said.

Before the change of administration in April 2018, MEWT was planning to build Anti-poaching camps in Kasane, Maun and Kang. The design for the three camps which were each to cost P70 million has already been completed and just awaiting construction.

The outspoken Serowe West MP said members of the APU are now only equipped with hunting raffles that cannot match the firepower of poachers who are well equipped with military training background and weapons of war. He also argues that the shoot to kill policy worked for Botswana because poachers knew that once they cross into the country their earthly departure could be fastracked by the anti-poaching operations.

Defending the move to disarm the DWNP APU, Masisi said it was against the law to equip wildlife officers with weapons of war. “You cannot promote illegality and claim to be law abiding. I am an addict to the rule of law and cannot be associated with banditry and illegality. The stretch of imagination that I can be associated with illegality is utter nonsense,” he said.

There are allegations that some of law enforcement agents could be part of the poaching cartels and giving Intel to poachers. In response TK said it could be possible but was quick to state that he is no longer part of government and cannot say if it is true. “Remember that our Intelligence Unit once arrested DIS officers with ivory and they failed to account for it. We handed the case to the police and it just disappeared and when we enquired we were told kgang eo e ko bagolong,” said TK, throwing his hands in the air in despair before adding that the then Deputy Commissioner of Police – Bruno Paledi – ordered that the suspects be released from police custody.

Another sting operation by DWNP intelligence Unit uncovered a secret stash of elephant tusks at a DISS camp in Ngwashe, near Nata village in northern Botswana. If during that time DIS could be caught with ivory that they could not account for, TK says anything is possible. The current situation, according to the former cabinet minister, is scary and could negatively affect Botswana tourism. “If we cannot protect our animals what about the citizens,” he asked rhetorically.

Tshekedi, who is now a Member of Parliament under the Botswana Patriotic Front (BPF), said he is considering writing to President Mokgweetsi Masisi volunteering to help. “I am ready to work with President Masisi to find solutions to the high rate of poaching because it is threatening our tourism industry. This is not a partisan issue but rather an issue of patriotism,” he revealed, adding that he is in good terms with President Masisi.

TK finds a statement released by the MEWT calling on citizens to help arrest poachers as reckless and unfortunate. “They are now telling the poachers that they are helpless and are now running to the public for help,” he said.

Last week a Wildlife and Livestock Veterinarian Erik Verreynne put the blame on the previous administration that TK was part of, for believing that Botswana was a safe haven for wildlife saying it was naïve and arrogant. TK does not take kindly to the suggestion, saying Erik thinks highly of himself but he is just a veterinarian. “Who is he, what experience and expertise does he have? He is just a vet and one of the issues I had with him is that he wanted to be used when doing relocation of rhinos but I refused and appointed a Motswana Dr Reuben as the rhino relocation coordinator,” hit out TK saying Verreynne is chewing sour grapes.

Efforts to get comment from DWNP were fruitless as they did not respond to the questionnaire sent to them last week. The publication wanted to know if there has been any arrests made regarding the killing of the 39 elephants and if it is true that some DWNP officers might be part of the poaching cartel.

Responding to the escalating poaching especially of rhinos in the delta, President Mokgweetsi Masisi revealed that the country is looking at changing strategies on anti-poaching as well as renegotiating partnerships the country has with other stakeholders.

He argued that the escalation in the number of poaching incidents is not due to any change in policies towards anti-poaching as some may believe. Masisi indicated that due to the recent rise in rhino poaching, there is an imminent need to change strategies, but due to security reasons he could not reveal the new strategies to fight against poaching.

Taking a pot shot at his predecessor former president Ian Khama and those close to him, Masisi said that there is a worrying emergence of a small grouping that always have commentary of the poaching situation in Botswana intended to tarnish the country as a good haven for animals and in turn call for boycotting of Botswana tourism.