By NewsroomSeptember 21, 2020Land conservation
No Comments 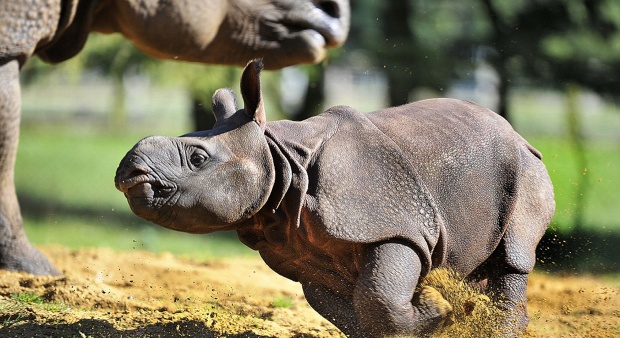 One of the new arrivals at Ujung Kulon National Park. As many as four Javan rhinoceros have recently been born according to park management. The birth was discovered through monitoring a video trap. Original photo as published by Tempo.Co.

The male baby rhino is named after “Luther” while the female one is named after “Helen”, Director General of Nature Resources and Ecosystem Conservation at the Environment and Forestry Ministry Wiratno said in a statement that ANTARA received here Sunday.

The births of these one-horned rhinos also revealed that the population of this species had kept rising and given a hope for a successful Javan rhino conservation efforts, Wiratno said.

The living condition of Luther and Helen is precisely known from 93 video cameras that the Ujung Kulon National Park authority installed for monitoring the rhino couple from March to August, he said.

The food availability for the Javan rhinos in the protected national park area is more than enough, he added.

As of August 2020, the total Javan rhino population in Indonesia has reached 74 individuals comprising 40 males and 34 females, according to the Environment and Forestry Ministry.

Indonesia has been striving to conserve its rhino species for decades. As a result, the population of one-horned Javan rhinos and two-horned Sumatran rhinos (Dicerorhinus sumatrensis) is believed to have increased quite encouragingly over the past few years.

ANTARA noted that the Javan and Sumatran rhinos are two out of only five species of rhinos that have survived globally.

The Javan rhino had once occurred from Bangladesh, Myanmar, Thailand, Laos, Cambodia, Vietnam, and probably southern China through peninsular Malaya to the Indonesian island of Java. But, beginning in the middle of the 19th century, the species was extirpated from most of its historical range.

The Javan rhino now is only found in isolated area in the Ujung Kulon National Park (Pandeglang, Banten Province), at the western-most tip of Java Island.