By NewsroomMay 21, 2021Photography
No Comments 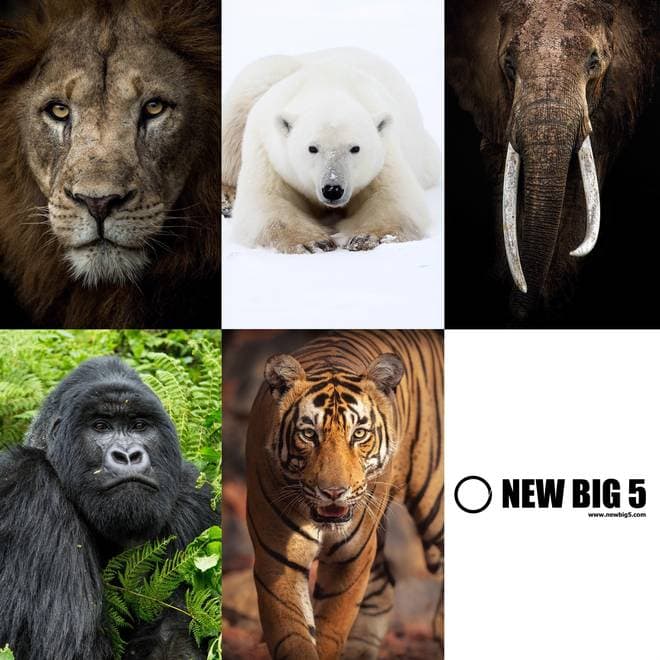 The New Big 5 project. Image: As originally published by The Hindu.

Two of Kaziranga National Park’s ‘Big Five’ animals have made it to the planet’s ‘New Big 5’ for shooting with the camera.

Missing from the global list of “favourite animals to photograph” is the greater one-horned or Indian rhinoceros for which Kaziranga was born in 1905.

The African cousin of Assam’s iconic and apparently armour-plated animal was in the original ‘Big 5’, a term that trophy hunters used for the five most prized and dangerous animals to shoot and kill.

The others on the hunters’ list were the elephant, leopard, Cape buffalo and lion.

The New Big 5 project, an international initiative of more than 250 of the world’s wildlife photographers, conservationists and wildlife charities, has named the five animals for framing instead of firing at. These are the elephant, polar bear, gorilla, tiger and lion.

Kaziranga, home to more than 55% of the one-horned rhinos on earth, has a sizeable elephant population and the highest density of the tiger in India.

The rhino, elephant and tiger form Kaziranga’s Big Five along with the Asiatic water buffalo and swamp deer.

Since its launch in April 2020, the project to list the animals received more than 50,000 votes from wildlife lovers.

“The 5 animals that wildlife lovers around the world voted to include in the New Big 5 of wildlife photography are not just some of the most beautiful, incredible animals on the planet. All five also face serious threats to their existence,” Mr. Green said.

Five for a million species

“The New Big 5 are the tip of the iceberg. They stand for all the creatures on the planet, so many of which are in danger. From bees to blue whales, all wildlife is essential to the balance of nature, to healthy ecosystems and to the future of our planet,” he said.

“I’m so happy that tigers have been given the importance they deserve. They are a flagship species for the conservation of their habitats and all other life that exists there,” said Vivek Menon of Wildlife Trust of India, one of the collaborators of the project.

“Poaching for tigers’ body parts has taken a heavy toll for an animal already threatened by forest loss, by the fall in its prey numbers due to hunting, and from human-animal conflict. In India, they are threatened by habitat loss and poaching,” he said.

Listed as endangered by the International Union for Conservation of Nature, tigers are the closest of the big cats to extinction. There are about 3,900 tigers left in the wild globally but an estimated 20,000 are in captivity.

In India, tiger numbers are stable. But the striped cat has been largely wiped out in Cambodia, Vietnam, Laos and China. The Malayan (150-200 left) and Sumatran (300-370 left) sub-species are listed as critically endangered.

The conservationists in the project said one million species currently face the threat of extinction. All the New Big 5 animals are keystone species, essential to the balance of nature in their habitats, biodiverse ecosystems and the survival of other species, including humans.