By NewsroomMarch 3, 2020Conservation, Translocation
No Comments

In another conservation success story, two one-horned rhinos were translocated from Assam’s Kaziranga National Park to Manas National Park situated about 280-kms away, on Sunday. Two sub-adult female rhinos were captured on Saturday and were released in the Bansbari range of Manas in western Assam on the wee hours of Sunday as per protocols of Indian Rhino Vision (IRV) 2020. 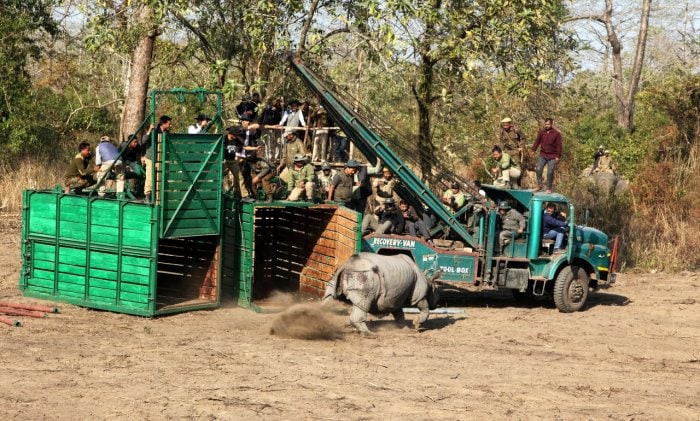 It is being implemented with the help of several other organisations. With this, the number of rhinos translocated to Manas since 2005 under the vision reached 20 and two more are also likely to be translocated from Pobitora Wildlife Sanctuary.

Pobitora having 102 rhinos is situated in the Morigaon district and is about 50kms east from Guwahati. Kaziranga, a Unesco World Heritage Site is the home to the world’s largest number of one-horned rhinos (2,431 as per the 2018 Census) followed by Pobitora (102), Orang National Park (100) and Manas (41).

Sunday’s translocation took the rhino population in Manas to 43. Manas, where the wildlife face threat due to long insurgency problem lost its Unesco (Natural) World Heritage Site tag but translocation of the rhinos contributed to get the status back in 2011.

“During the transportation process, members from the various teams formed by the Translocation Core Committee that included oicials and sta from the Assam forest department, Assam police, AFPF, WWF-India, Wildlife Trust of India, Aaranyak and other organizations accompanied the thin convoy that covered a distance of approximately 280km overnight to reach Manas at around 2.30 am on Sunday,” said a statement issued by Amal Chandra Sarmah, field director of Manas National Park.

It said the IRV2020 programme was one of the key factors that helped Manas Park get back its UNESCO (Natural) World Heritage Site status back in 2011. “It can be expected that rhinos translocation program at Manas will also contribute to the mixing of genes from individuals from Pobitora Wildlife Sanctuary and Kaziranga National Park populations and set up a healthy ground for a breeding population of rhinos for the future of the species. This has also contributed to the overall development of the park including tourism and transboundary cooperation between India and Bhutan,” said the statement. Rhinos in Assam have faced a serious threat from an international gang of poachers. Over 70 rhinos have been killed by poachers since 2013, mostly in Kaziranga and Orang.