By NewsroomMarch 19, 2020Anti-poaching, Conservation, Science and technology
No Comments

DURBAN: Cutting-edge technology has been linked to intercepting a poaching incident at a provincial game park earlier this month.

Dube-Ncube said the technology was inspired by the 4th Industrial Revolution to protect KwaZulu-Natal’s wildlife and eco-tourism.

She said staff at Ezemvelo KZN Wildlife, the Peace Parks Foundation and the national Department of Environment, Forestry and Fisheries had been working hard to install a number of technologies in the Hluhluwe- iMfolozi Park. This had been part of a long-term strategy aimed at protecting the rhino population. 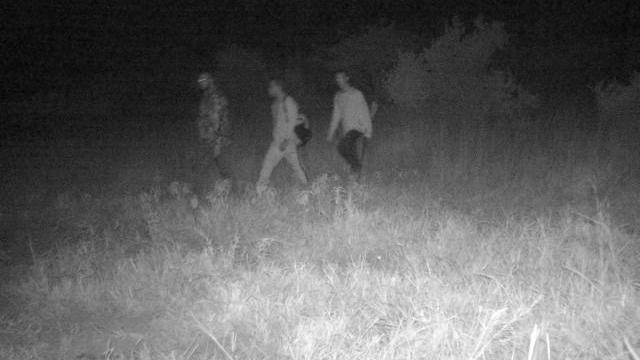 Original image by The Independent Online: The three suspected rhino poachers were caught on a camera that used artificial intelligence.

“We have decided to invest in Smart Park connectivity and the integration of systems to ensure early detection and rapid response. One of the key instruments being used is the installation of infrared trap cameras linked directly to the Parks Operational Centre,” said Dube-Ncube.

“These cameras using artificial intelligence identify people and send an immediate alert to the Operations Centre who then rapidly alert and activate the relevant Reaction Unit and associated resources,” said Dube-Ncube.

The MEC said the incident earlier in the month where two poachers were shot and died at the scene, while a third escaped, was an example of the technology at work.

“An infrared camera detected three armed poaching suspects and automatically alerted the Operations Centre, providing the number of persons, grid reference and direction of the incursion. The Reaction Unit was immediately briefed and dispatched. The suspects were located in the area and challenged. The Reaction Unit members who came under immediate threat defended themselves, which resulted in the two suspects being fatally wounded,” Dube-Ncube said.

She said police managed to recover a heavy calibre hunting rifle and knives commonly used to remove rhino horns. One of the fatally wounded suspects was a well-known high-level rhino poaching suspect. He had been charged for the illegal possession of rhino horn in 2017. He had also been suspected of not only being directly responsible for a number of rhino deaths but of co-ordinating other Mpumalanga poaching groups to target Hluhluwe-iMfolozi Park.

Ezemvelo spokespers­­on Musa Mntambo said 28 rhinos had been poached in KZN since the start of the year.