By NewsroomDecember 31, 2019Uncategorized
No Comments

While plenty of vacation photos being posted this holiday season are bringing joy, one Ukrainian lawmaker’s resurfaced photos from Africa have sparked outrage.

Pictures have surfaced showing another member of parliament from the pro-Russian Opposition Platform party with killed wild animals, including a number of endangered and critically endangered species.

Nestor Shufrych, chair of the Ukrainian parliament’s committee on freedom of speech, has hunted and killed golden wildebeest, golden oryx, brown hyena and three black rhinos in Namibia and South Africa, according to photographs first posted by a safari company in 2015, and shared online by Ukrainian civil society groups on Dec. 29. 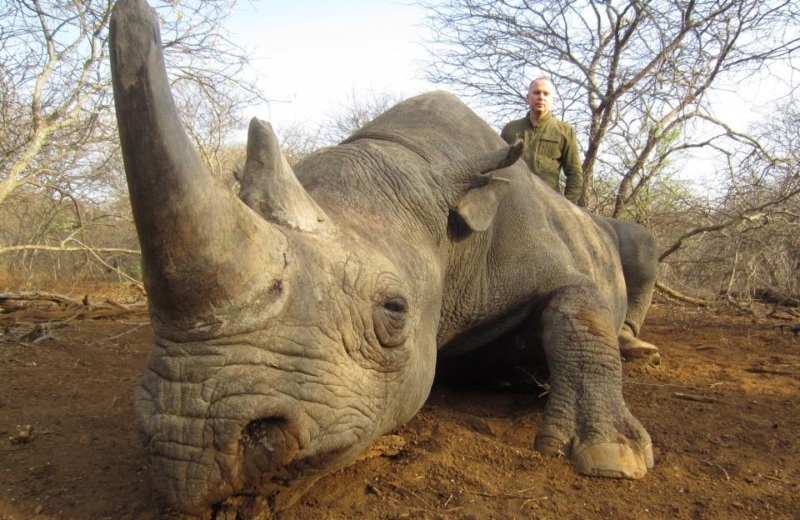 Original photo as published by Kyiv Post: Nestor Shufrych, now a chair of the Ukrainian Parliament’s committee on freedom of speech, poses with a critically endangered black rhino killed during a safari in Namibia in 2013. Shufrych is the second lawmaker for the pro-Russian Opposition Platform party after Volodymyr Kaltsev that was spotted killing endangered animals in Africa. (Photo by Thormählen & Cochran Safaris)

The safari company in question brands itself as an “African trophy hunting specialist” and says it “provides international clients with a unique classic African safari” – it also highlights Shufrych as one of its best clients, and praises him for hunting and killing a number of “very rare” and “super rare” animals for trophies.

There is no evidence that Shufrych has done anything illegal. Some conservationists support regulated and controlled trophy hunting as beneficial to biodiversity and communities. It can provide revenue for deprived areas and can also fund bigger conservation efforts. The practice is, however, extremely controversial, especially when endangered and critically endangered species are involved.

Shufrych was praised with special recognition for killing all three subspecies of the black rhino, all critically endangered according to the World Wide Fund for Nature (WWF) and the International Union for the Conservation of Nature (IUCN).

“Nestor Shufrych became the first and only hunter that ever collected three different black rhino subspecies,” the safari’s website says, in a post that was shared online by Ukrainian activists over the weekend.

Shufrych admitted to having hunted the animals in Namibia in 2013 “with the permission of the authorities authorized for this by the national government.” 2013 was the last time Shufrych went on such an “expedition” to Africa, according to his press service.

“The target was a male of non-productive age, aggressive by nature, subjected to shooting,” the press service said in a statement. The statement did not specify which of the killed animals were of non-productive age. Some of the species seen in the photographs, like the cheetah and golden oryx, appear to be young.

UAnimals, a Ukrainian non-profit that advocates for animal rights, said in a statement that there is no place in parliament for the “fans of killing” like Shufrych. “UAnimals and the Humane Country inter-factional group condemn such actions by the lawmaker and stress that killing animals in the modern world is unacceptable and is a sign of degradation,” the non-profit said in a Dec. 29 statement, sharing multiple photos of Shufrych with slain animals.

The Humane Country inter-factional group in the Ukrainian Parliament includes 25 lawmakers from the Servant of People, the Voice (Holos), the European Solidarity and Batkivshchyna parties.

Shufrych is a veteran politician notorious for his bad behavior and proneness to getting involved in physical fights.

Before joining the strongly pro-Russian Opposition Bloc party, he was a member of ex-President Viktor Yanukovych’s Party of Regions and its successor, the Opposition Bloc. In January 2014, Shufrych voted for the “dictatorship laws” aimed at crushing the EuroMaidan protests and freedom of speech.

Volodymyr Kaltsev was the first lawmaker from the Opposition Platform that was known to hunt wild animals in Africa. During the parliamentary election campaign, the Soy Alma y Espíritu Animal nonprofit posted photographs of Kaltsev posing with killed ostrich, antelope and two lions, including an endangered species of a white lion.

As for the iconic black rhino, all three different subspecies, intensive anti-poaching efforts have helped its population recover since 1993 when there were only 2,000 left in the wild. The population has now grown to about 5,500 but the animals are still critically endangered.