Political violence in Cooch Behar has disrupted a project to develop a rhino habitat in a reserve forest in the district.

Cooch Behar has been tense since October 17 when a Trinamul supporter, Majiruddin Sarkar, died in the Patlakhawa area after being assaulted by suspected BJP supporters. Twelve people have been arrested in connection with the case. BJP leaders have denied the allegation.

The forest department had planned to release two rhinos in a forest in the same area, called Patlakhawa forest, on November 12.

“The plan has been deferred because of the disturbance. Unless things settle down, we are not going to risk sending the animals there,” an official at the forest department headquarters in Calcutta said. 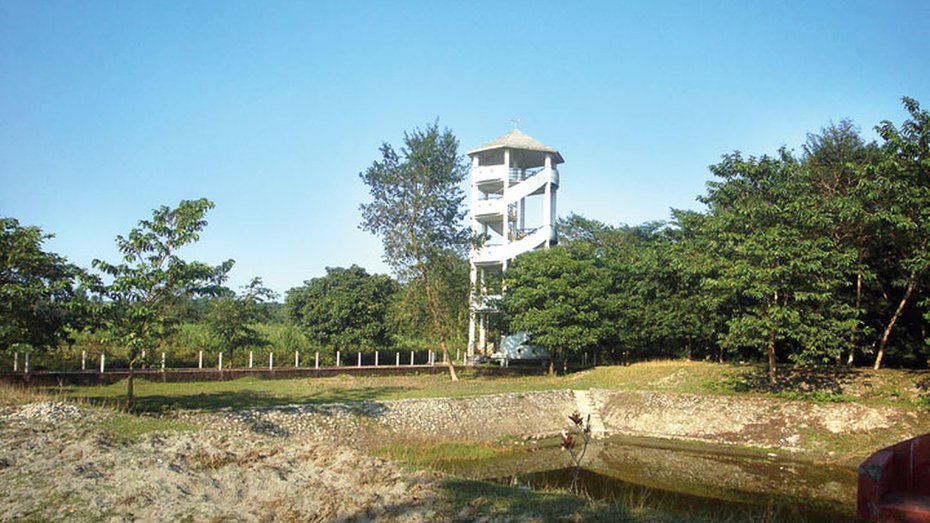 Original photo as published by The Telegraph: A watchtower in Cooch Behar’s Patlakhawa forest, in which a rhino habitat is to come up. (Main Uddin Chisti)

The problem stems from the joint forest management committees, which were set up a few years ago for the rhino project. The committees were formed with villagers living on reserve forest fringes.

The forest department had recruited 32 villagers for the project. The primary job was to expand the grassland and fence the area where rhinos would live.

The recruitments were based on recommendations of the forest management committees, which sources said were filled with Trinamul supporters.

The equation has changed with the BJP’s rise in the district. Nisith Pramanik, a Trinamul leader, switched to the BJP before the Lok Sabha polls and won the Cooch Behar seat on a BJP ticket. The area has been rocked by clashes since.

The local unit of the BJP recently submitted a memorandum to the Patlakhawa beat officer, alleging recruitments were done at the behest of the state’s ruling party. “The men who have got the jobs are close to Trinamul. We will not stop the protests till our men, too, are given jobs,” Jiban Das, a BJP leader, said.

“Some people have threatened to block roads and launch a series of protests if we go ahead and release the rhinos,” a forest official in north Bengal said.

The forest department had initially planned to send two rhinos — a male from Gorumara and a female from Jaldapara — to Patlakhawa to balance the animal population. According to the last census, Gorumara had 52 and Jaldapara 237 rhinos. Rhinos are found in the wild in only these two parks in Bengal.

“It is always safe to have a backup population. A disease in one rhino can wipe out the entire population in a park. Multiple habitats reduce infighting and the risk of death,” Ravi Kant Sinha, Bengal’s chief wildlife warden, said.

The project was announced in 2017 and most of the work has been done. “We cannot go ahead with the project without taking the people of the area into confidence… they are extremely important to ensure the project’s success,” Sinha said.

“The project is not shelved. It has been delayed. We are working continuously to win people’s trust,” said Ujjal Ghosh, the chief conservator of forests (wildlife, north) who is supervising the project.

Another official said the possibility of poaching could not be ruled out if some people were hostile to the project. He said some officials had in the past met protesters but could not achieve a breakthrough.

“Rhinos in the park would have made Patlakhawa a tourist attraction. The BJP is against development and only busy in stoking trouble in the area,” Bhupati Lal Das, a Trinamul leader in the area, said.

The divisional forest officer had on Friday convened a meeting with Trinamul and BJP supporters.