By NewsroomDecember 21, 2019Anti-poaching, Education
No Comments

HANOI: The US Agency for International Development (USAID) Wildlife Asia has released new Public Service Announcements (PSAs) as part of the third phase of the Chi initiative – a communication programme to help decrease consumer demand for rhino horn in Vietnam.

Launched in August 2018, the third phase of the Chi initiative focused on reducing demand for rhino horn and other illegal wildlife products among Vietnamese businessmen – a key consumer demographic.

Vietnam is a key destination and transit country for rhino horn and other illegal wildlife products. Reducing demand for rhino products in the country is integral to decreasing trade flows and combating poaching. 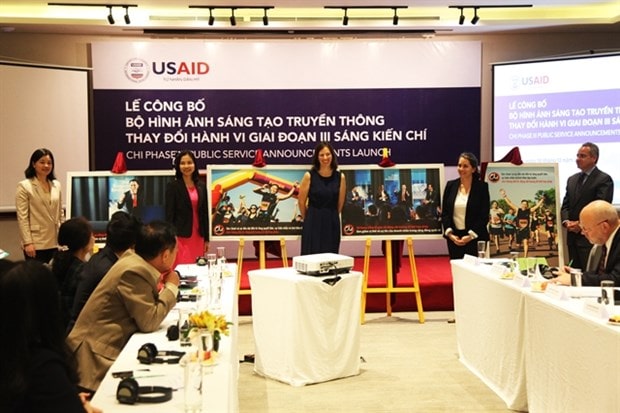 Original photo as published by Vietnam Plus: Delegates launch new Public Service Announcements (PSAs), including images and messages, as part of its Chi initiative phase 3 in Hanoi on December 18. (Photo: VNS/VNA)

Rhino horn products are consumed in Vietnam largely for their perceived health benefits and reflection of wealth and status. The two new PSAs, including two images and messages, challenge these beliefs.

The first PSA emphasises the fact that strength and stamina do not come from consuming wildlife products, but instead are the direct results of work and perseverance.

The second PSA highlights the incompatibility of wildlife consumption with international business practices. It stresses the risks, including the loss of prestige and reputation, of using, buying, or gifting illegal wildlife products such as rhino horn.

To ensure their effectiveness, the PSAs have been developed in partnership with the Vietnamese business community. They will be disseminated through multiple media platforms including print, billboards, and social media to achieve maximum exposure.

They will also be promoted by partners such as the Party Central Committee’s Commission for Information and Education, Vietnam Chamber of Commerce and Industry, Vietnam Automobile and Transport Association, and Vietnam Central Buddhist Association.

The Chi Initiative phase 3, funded by USAID, was launched in August 2018. The campaign is working to further mobilise the business community to integrate the protection of wildlife as an element of corporate social responsibility and as a means of making Vietnamese businesses more competitive.

TRAFFIC, a non-governmental organisation working on the wildlife trade, launched the first phase of the Chi initiative in 2014 based on consumer research which identified wealthy Vietnamese businessmen between the ages of 35 and 55 year as a key rhino horn user group. The overarching message of Chi drives the concept that success, masculinity, and good fortune come from an individual’s strength of character and not from the use of illegal wildlife products.