HO CHI MINH CITY, VIETNAM: As the coronavirus pandemic continues its deadly onslaught around the world, the Vietnamese government has moved to ban the wildlife trade.

Amid scientific theories that the outbreak of the novel coronavirus disease (COVID-19) began at a market in Wuhan, China, that sold live wild animals and animal parts, a group of conservation organizations sent an open letter to Vietnam’s prime minister on Feb. 16.

The organizations, based both within Vietnam and abroad, called on Prime Minister Nguyen Xuan Phuc to “take strong and sustainable actions to halt all illegal wildlife trade and consumption in Vietnam.”

“The emergence of COVID-19, with initial evidence of a link between virus host and transmitters from wildlife, pushed us to bring it to the attention of policymakers to address the risk, as well as the need to protect wild animals,” Trinh Le Nguyen, executive director of People and Nature Reconciliation (PanNature), a Hanoi-based conservation organization that signed the letter, said in an email. “In addition, we call on the government to enforce wildlife protection laws and eliminate the illegal trade and consumption.” 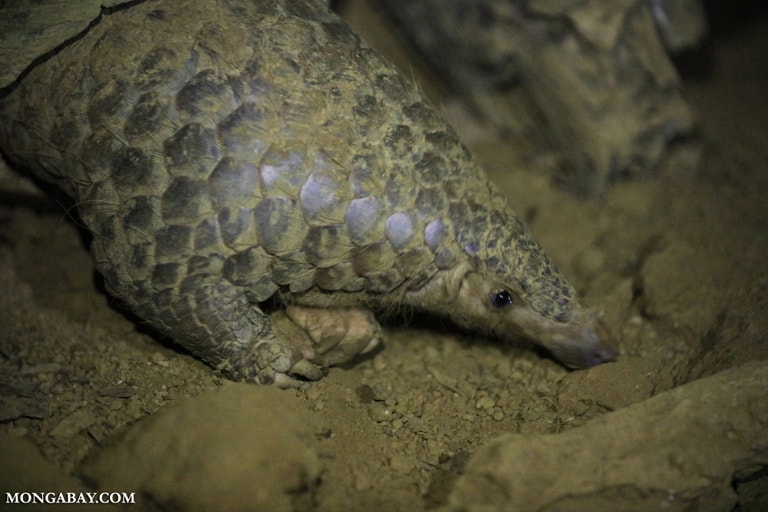 Original photo from: A pangolin in Vietnam. Pangolins are widely traded for meat and use in traditional medicine. There is some evidence that the coronavirus responsible for the COVID-19 pandemic may have originated in pangolins, but the matter is not yet settled scientifically. Image by Rhett A. Butler / Mongabay.

Prime Minister Phuc responded on March 6 by tasking the Ministry of Agriculture and Rural Development (MARD) with formulating directives to ban the trade and consumption of wildlife and submit them to the government for review by April 1. MARD did not respond to request for comment.

In late February, the Chinese government permanently banned the wildlife trade and the consumption of all non-aquatic wild animals, including those raised in captivity. This followed a ban on wild animal markets nationwide, a reaction to the outbreak. However, according to the New York-based NGO Wildlife Conservation Society, China’s ban only covers products intended to be eaten, not those destined for other uses, such as traditional medicine or fur.

“We would expect [Vietnam’s MARD] to look at reviewing policy around how wildlife is dealt with, both in terms of the international- and national-level trade, both illegal and legal,” said Benjamin Rawson, conservation and program development director at the NGO WWF Vietnam, a signatory to the NGO letter. “Our hope is that it includes directives around how you deal with wildlife as a food item, because that’s where a lot of the risks are in the supply chain, from hunters all the way to consumers.”

Wild animal meat, while not widely served in Vietnam’s major cities, is relatively easy to find throughout the country and remains common in more rural areas. It is difficult to assess the size of the wildlife market in Vietnam, illegal or legal. The illegal trade involves high-value species like tigers, rhinos and elephants, while most smaller species are unregulated. The supply is a mix of wild-caught animals, such as pangolins and leopard cats, and animals raised on farms, such as civets and moon bears.

Birds are particularly sought-after. According to a February 2020 report (PDF) from the international NGO TRAFFIC, in April 2016 a three-day survey in Hanoi and Ho Chi Minh City, Vietnam’s two biggest urban areas, found 8,047 birds from 115 species for sale, 99% of which were native to the country and 90% of which had no legal protection. The report also found numerous advertisements for bear parts and products on e-commerce sites that broke national laws.

Rawson said he is encouraged by the government’s decision to act on the trade, especially amid the wide-ranging social and economic impacts of the COVID-19 outbreak in Vietnam. The multi-billion dollar tourism industry has been wiped out, with the major markets of China, South Korea and Europe either completely cut off or heavily restricted, while the huge manufacturing industry faces supply chain disruptions and the likelihood of reduced demand.

There have been no reported deaths from COVID-19 in Vietnam as of this writing. But there have been 75 confirmed infections, many among foreign tourists, and the number appears set to increase. “Essentially, we have this COVID-19 outbreak, we have stock markets in freefall, general fear in the populace, a public health crisis, and it’s really a result of people wanting to eat wildlife,” Rawson said. “So if we really want to address this seriously, we have to get to the bottom of this demand.”

Addressing wildlife trade and consumption will do nothing to staunch the current COVID-19 pandemic, but the hope is that it will prevent a global disaster of this kind from happening again.

Much attention has been paid in recent years to Vietnam’s role as a consumer and an international hub of high-value species such as rhinos, elephants and pangolins, and awareness of the need to preserve these species has improved, especially among young Vietnamese.

“Demand in Vietnam, China and other countries is certainly driving the poaching of elephants and rhinos in Africa,” Rawson said, “but what is often overlooked is the biodiversity crisis that’s happening in the forests of Vietnam and surrounding countries, where wildlife is being snared indiscriminately for consumption.”

How to End the Trade

Enforcement in relation to every step of the trade will be key, Rawson said. “That means tightening up the investigative work, arrests and prosecutions in the illegal wildlife trade, and the farming of wild animals is another key area that needs to be looked at very closely to mitigate future risk,” he said.

WWF has been working on this within Vietnam by supporting enforcement agencies within protected areas like national parks.

“But of course, it has to go beyond just the boundaries of protected areas,” Rawson added. “The key is addressing the drivers that cause people to go in and hunt wildlife. There’s money to be made by wildlife traders, so we do investigative work around identifying those traders and supporting local courts to make prosecutions [and] to understand wildlife-related laws and the severity of some of these infractions.”

Awareness-raising on the consumer end will also be crucial, as some people believe that wild animal meat is safer than farm-raised meat.

“It’s an important moment in time to try and change those cultural perceptions,” Rawson said. “There’s no regulation, no cold-chain storage for wild meat, and there are reservoirs of disease in wild animal populations. And the conservation community is moving quickly to take advantage of the outbreak to tell people that this is not a safe option, either for personal or public health.”

Nguyen, of PanNature, said he expects to coordinate closely with MARD and other government agencies to formulate a ban. However, he said the agency had not yet reached out, and no further details of what the ban might include are available yet.

The NGOs’ letter recommends identifying restaurants that illegally sell wild meat and shutting them down, closing markets where wildlife is illegally sold, requiring e-commerce platforms and social media to remove advertisements of illegal wildlife products and creating strong regulations on raising wildlife in captivity, among other measures.

“The current crisis is a direct result of demand for wildlife products, usually illegal, and we really need to address the supply and demand of wildlife meat if we’re going to avoid future catastrophe,” Rawson said. “We’ve had several, and these sorts of things are a matter of when, not if, and while they may be rare, the impacts are significant. It has to be a high-level policy issue, and it’s starting to become one, which is very encouraging.”