Five Vietnamese youth were given a once-in-a-lifetime opportunity to attend the World Youth Wildlife Summit, experience the Kruger National Park and Hluhluwe-iMfolozi Game Reserve, join a rhino de-horning exercise, visit the Zululand Anti-Poaching Wing and K9 Unit, and participate in a walking trail with a renowned guide.

VukaNow supports the shared commitments of the US government, SADC and its member states, private sector partners, and civil society to decrease wildlife crime across southern Africa. The US government’s commitment to help protect the iconic animal populations of South Africa through USAID rests on the recognition that wildlife crime is not just a conservation issue, but a form of transnational organised crime whose impact can be felt by communities around the globe.

The group from Vietnam arrived, with Mark Spicer, WildAct Vietnam’s technical adviser who acted as the group mentor, at the Ranger Camp at the Southern African Wildlife College where a geodesic MEGAdome had been erected for the World Youth Wildlife Summit from the September 21 to 24. 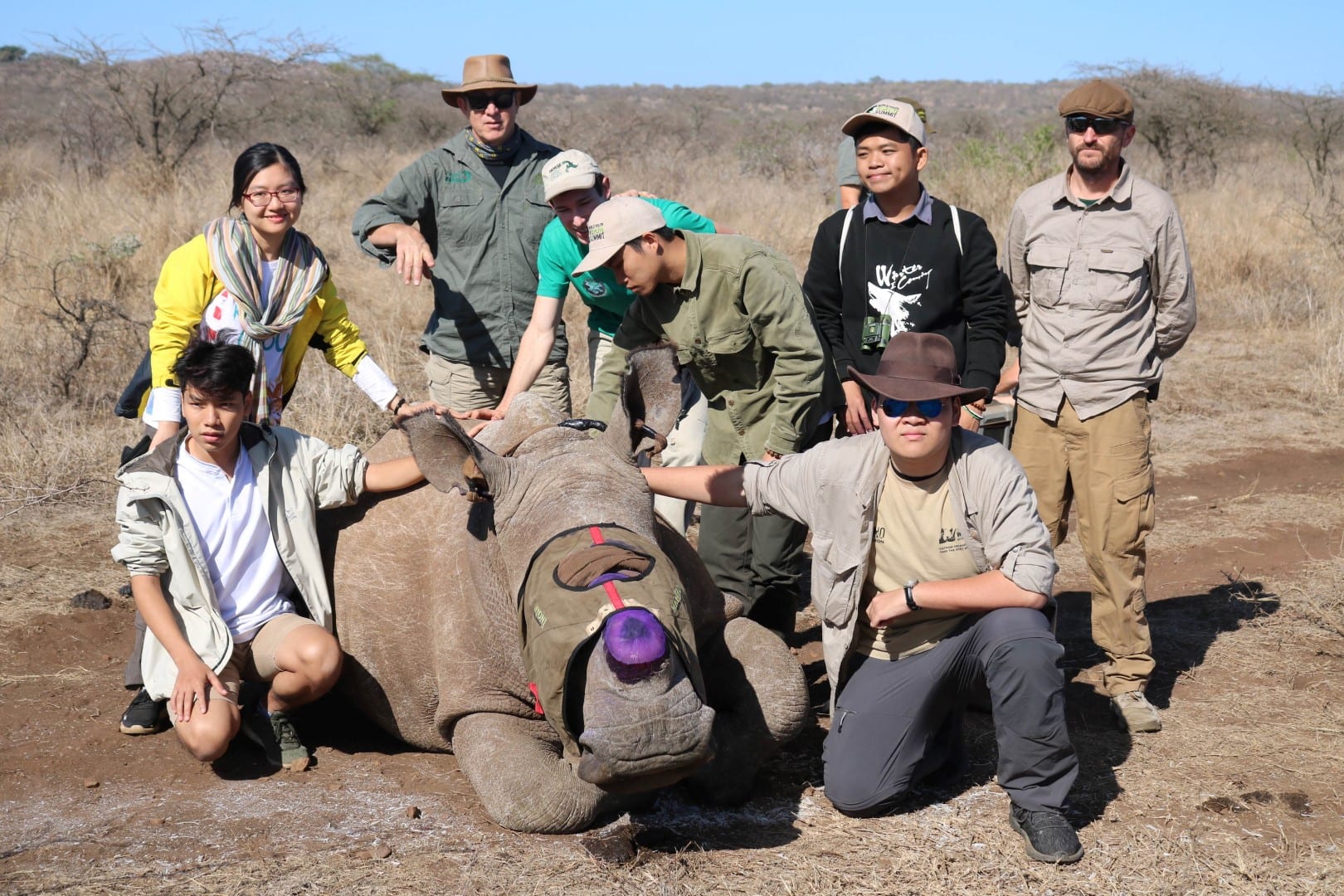 225 youth delegates, adult chaperones (educators and community leaders), conservation experts and keynote speakers came together, supported by donors such as South African National Parks, Peace Parks Foundation and Tourism South Africa, for an intensive four-day program, that included a game drive into South Africa’s iconic Kruger National Park and engaged the youth in topics such as the responsible use of wildlife resources, strategies for demand reduction, the link between poverty and poaching, habitat loss, and the role of education and awareness.

Organised by Project Rhino, African Conservation Trust and the Kingsley Holgate Foundation, the aim was to inspire the youth become Ambassadors for Conservation and influencers to help reduce wildlife crime.

After watching the hard-hitting documentary STROOP – journey into the rhino horn war and seeing Vietnamese individuals engaged in the illegal trade and consumption of rhino horn, Van from Ho Chi Minh City, gave an emotionally charged speech expressing a deep shame for the Vietnamese involvement.

“This is such a big system that’s already in place, how I’m going to fight something like that?”

However, the documentary also showed courageous Asian individuals, including a Vietnamese conservationist, who do undercover work alongside the South African authorities in the fight against the illegal trade network. Van continued to answer his own question emphatically, referring to meeting fellow delegates and engaging with the Summit speakers, “I want to be more courageous and you have helped me do that.”

The Chargé de Affaires for the US Embassy in South Africa, David Young, reiterated this point in his World Rhino Day speech at the Summit saying, “You are not alone in this great task. Look around you. You are surrounded by an amazing body of experienced experts, and fellow young conservation leaders. There is a wealth of knowledge and tools to help you.”

After the Summit, the Vietnamese delegation, accompanied by Janet Frangs, a freelance Wilderness Guide, spent a further week learning more about wildlife, specifically rhino and the poaching epidemic, as well as engaging with South African culture and communities.

Their excursion began at Bongani Mountain Lodge near southern Kruger before they headed for Zululand. When speaking to the staff at the lodge, the group realised that the decimation of wildlife is not only ecologically tragic but also puts jobs, families and communities in jeopardy.

To contrast the Summit’s intense discussions and revelations, a walking trail in Hluhluwe-iMfolozi Game Reserve was arranged with Nunu Jobe, also known as the ‘Barefoot Ranger’ – a highly experienced trails ranger and Director of Isibindi Africa Trails. Nunu highlighted the beauty of the wilderness and the vital importance of conservation to visitors and surrounding communities and shared his unique story: he was once a bushmeat poacher but is now a passionate conservationist.

Reflecting on the walk, Tu from Hanoi, said, “Nunu’s story of the transition from a poacher to a ranger was so moving and thought-provoking…we got to witness his trying to connect humans with nature in an effort of reminding humans of their roots.”

Wildlife Conservation student Son Tra, also commented, “I had a chance to see the animals I’m trying to protect in the wild and that gives me more motivation to continue my conservation work. Furthermore, walking with Nunu and listening to his story make me believe that we can change the local community.”

After getting close to wild rhinos, with their horns intact, the group then participated in a rhino-dehorning exercise on a private Zululand reserve.

Son Tra added that the dehorning process pushed him to question the best ways to protect this species’ long-term as dehorning is a costly ongoing procedure.

Nga from Danang in central Vietnam, was also moved by the experience, “Although there can be seen a failure of wildlife protection in dehorning rhinos instead of keeping them freely in nature, I appreciate the effort of the private reserve in doing their best to prevent rhinos from poachers.”

A visit to Project Rhino’s Zululand Anti-Poaching Wing (ZAP-Wing) and the K9 Unit, based in Hluhluwe, further emphasised the protection strategies employed by reserves to protect their wildlife – and the immense cost.

Thien, Van and Tu, who all work in or are studying marketing, communications and business, quickly realised that such industries are also of critical use to the conservation sector. Van, a passionate videographer and photographer, has already committed to making a short video about his trip here.

Thien, studying at the National Economics University in Hanoi said, “At the circle of sharing today, I absorbed many interesting ideas from everyone, and actually thought that with my marketing and business knowledge, I can somehow make an impact on the behaviour of rhino horns consumers in the future… and I hope it will be, because we are running out of time here.”

Further to this reflection, Tu added that conveying conservation messages should be done in the language that resonates with the local people – whether in Africa or Asia. He strongly believes that saving the rhino, and other wildlife, relies on relaying the human stories and tragedies behind this crisis – stories that may resonate more with Asian communities.

Nga’s wants to focus her efforts on education and awareness. “Greed in human beings cannot be completely removed until their heart has been naturally convinced. I personally don’t want to threaten, scare, or show anger when I request people to join in the efforts of wildlife conservation,” she says.

Project Rhino received individual pledges from the group and will continue to build the relationship, provide mentorship and support their actions in their communities back home.
“Our overriding aim is to provide the youth delegates with the knowledge and tools they need to become influencers and wildlife ambassadors in their home countries and communities, and take the lead in speaking out on behalf of endangered species and habitats that are in serious threat of extinction in their lifetime,” concludes Summit Director and CEO of African Conservation Trust, Francois du Toit.