The villagers on the fringe areas of the Kaziranga National Park have become more alert in conserving wild animals, including rhinos.

As a result of this awareness, the villagers of Kathcapori, Baruahchuk and Kanchikata apprehended a poacher, Gagon Eko, 35, at Lohore Chapori, 50km from here, on Monday.

Three men had planned to poach a rhino which had strayed from Kaziranga on February 24. But because of the strict vigil by the villagers, one of the poachers was caught. Two others managed to escape. 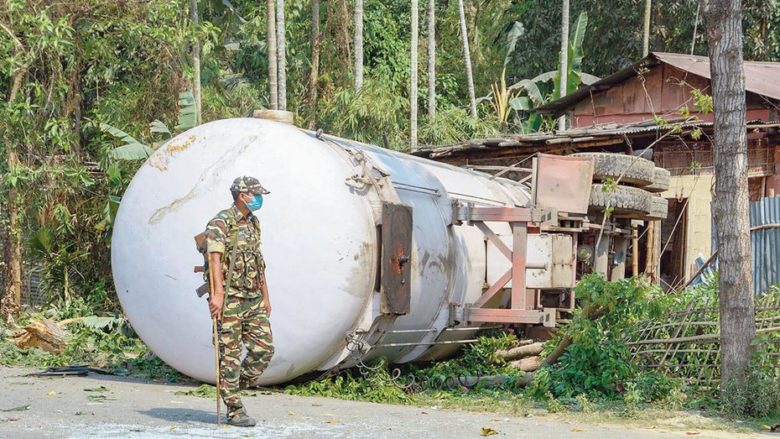 Original image as posted by The Telegraph India: A jawan gaurds a fuel tanker after it met with an accident near Rangia in Kamrup district on Tuesday.

The divisional forest officer (DFO), Eastern Assam wildlife division, Bokakhat, said the villagers are more sensitive in keeping an eye out for any outsider and so they easily caught the poacher. Kaziranga National Park director P. Sivakumar said the villagers showed good response to the appeal of participation in wildlife conservation.

The villagers later handed over the poacher to Kamargaon police with the help of the forest department’s patrolling team.

Two cases have been registered by the police and the forest department separately against the poacher.