By NewsroomDecember 27, 2019Anti-poaching
No Comments

Matt Yardley has just heard his favorite sound. It’s a radio dispatch in Zulu telling him that roughly three miles away, two alpha male lions have killed a giraffe, and are ravenously wolfing it down. Naturally, his trained ranger response is to chase this sighting at full speed in our Land Cruiser across the achingly wild, verdant expanse known as the andBeyond Phinda Private Game Reserve in the KwaZulu-Natal Province of South Africa.

What we come upon, two gluttonous brothers resting after the feast, is almost as interesting as what we’ve passed along the way. A dazzle of zebras, journey of giraffes, herd of elephant, and a crash of rhino. But not just any rhino. Black rhino—of which there are roughly only 5,000 in the world, according to the World Wildlife Fund. That’s a fraction of the estimated 100,000 that existed a few decades ago. 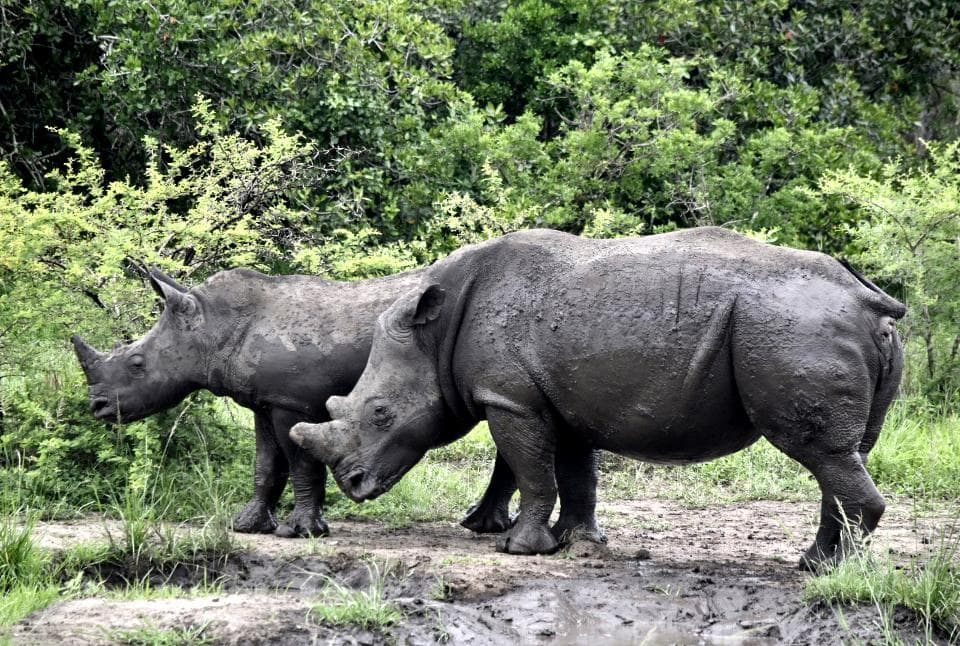 In Phinda, black rhino are thriving in large part because of Tara Getty’s family trust. The grandson of the late oil tycoon J. Paul Getty passed us in his own Land Cruiser, either leaving or returning from the rentable enclave known as the Phinda Zuka Lodge. “He’s the private jet guy,” says Yardley, a senior game ranger for the luxury travel company andBeyond, which is owned by multiple shareholders, including the Gettys. “Ever seen the movie All the Money in the World?”

I haven’t. But the sheer beauty and scale of this teeming-with-game landscape evokes the film’s title. In 1991, the Gettys helped turn what was pineapple and cattle farmland into Phinda, which means “the return” in Zulu. Without the Gettys, Phinda probably wouldn’t exist. And if this massive 28,555 hectare (70,560 acres) park wasn’t surveilled on a 24-hour basis by andBeyond conservationists, the rhino wouldn’t be here either.

Poaching in South Africa is as bad as it’s ever been, which reflects the country’s 29% unemployment rate. Just next door, Hluhluwe Imfolozi Park is facing severe government budget cuts, and losing hundreds of rhino a year to poachers. The impact is sobering.

“Conservation doesn’t pay for itself. Tourism alone can’t cover all the costs, so most game parks must rely on donors,” says Simon Naylor, Phinda Reserve Manager. “We pay fixed leases every month, which are very high. Security is the most expensive aspect. It’s about 8 million rand [$560,000 USD] annually to secure Phinda. So when we talk about investing in tech, it’d better be worth it, hey?”

Currently, Phinda is equipped with satellite tags, ultra-high frequency (UHF) ear tags manufactured by African Wildlife Tracking, UHF receivers, and a cloud-based storage platform called CMORE that receives incoming data, and displays it on a screen that resembles Google Earth maps. Ear tags were deployed here in May 2019, and are designed to inform drones that fly over the reserve and send back location data—that is, if thick forest cover doesn’t get in the way, or the tag’s battery hasn’t died.

The Biggest Threat is Internal

Management says dehorning the rhino (a major production involving vets, helicopters, immobilizing drugs, and expert rangers) is still the most effective weapon against poaching. Having recently increased their rhino count from 150 to over 200, you can see why they take that view. Perversely, Phinda’s biggest poaching threat comes from its own staff, which includes roughly 80 full time field rangers with boots on the ground. Naylor explains: “Often, someone inside is approached by syndicates and is blackmailed into providing information. Some just want the money.  The goal is to catch them before they do it.”

You’d think all the money in the world could put an end to poaching. But the reality is not that simple. You also need best-in-class security, law enforcement, and advanced technology to track not just the animals in the park, but people too. Enter big data and, for the first time in the African conservation industry, artificial intelligence. When you need cameras to decipher the difference between images of trucks, animals, safari guests and poachers, AI is the way forward.

“Increasingly, people are seeing the power of tech to support law enforcement. We’re a long way off from cyborgs doing it all for you. Until we get there, it’s a partnership between people,” says Craig Reid, manager at Malawi’s Liwonde National Park for African Parks, a well funded NGO operation that manages 16 National Parks and protected areas across Africa. Many conservationists are looking to them to lead the way.

The Rise of Smart Parks

When I speak with Reid, it sounds like he’s calling from paradise. With birdsong in the background, there is a warm honey lilt in his Namibia-born voice, shaped by a life spent outdoors in the African bushveld. He’s just come back from an afternoon tracking black rhino on foot, despite having access to Liwonde’s high-tech control room that could have done the job for him. In fact, it did.

“I knew where he was by looking at our computers. You know, I’ve been in conservation for nearly 30 years, and to see where our rhino are in real-time just by logging in is just incredible,” says Reid.

Right now, African Parks is testing a newly installed “low power wide-area network” in Liwonde, which follows its first “smart park” installation in late 2017, inside Rwanda’s Akagera National Park. These networks capture all the data from the park’s tracking devices, and feed it into a platform called EarthRanger by Vulcan Inc. Essentially, it’s data visualization and analysis software designed to “bridge the data gap” in wildlife conservation. African Parks is a fan of EarthRanger, because it allows a huge number of assets to be detected and analyzed in real-time.

To cover Liwonde National Park’s 540 square kilometers (133,437 acres), African Parks has set up 11 towers equipped with “gateways,” which are surveillance gadgets receiving messages from devices in the park. For example, if there is a transmitter on a cheetah’s collar, that collar will transmit the GPS location to the tower, which will be received in the control room. This enables African Parks to embed GPS long range (LoRa) sensors into rhino horns.

In and of itself, this strategy represents a major shift in game park management, because it ends the need for expensive satellite transmission fees. “We’re still paying off the construction of these networks. But, overtime, you can track your assets without satellite. That is the long term savings,” says Geoff Clinning, IT manager for African Parks. He’s known as the organization’s tech guru.

When I ask him why these networks exist only in two of his 16 managed parks, he says: “You have to prove the tech first before you adopt it everywhere. A smart park is one tool in your toolbox, that can have massive benefits. It’s not a silver bullet, but it makes your toolbox far more powerful.”

Of course, stopping poachers isn’t just a matter of knowing where your game is. It’s knowing where poachers are, too. This is where AI comes in. “Poacher Cams” are placed throughout the park. When the camera takes a picture, triggered by a motion detector, an algorithm analyses the picture and if it decides if it’s a human form. Inside the 24-hour control room, an alert pops up on EarthRanger, with the image attached. Operators then inform management and a response is initiated. This strategy has consistently led to the successful conviction of criminal poachers. South Africa’s Kruger National Park, one of Africa’s largest game reserves, is having similar success using radar cameras they call “meerkats,” which function much the same way, using night vision and artificial intelligence.

Combined, this managed tech is one way to avoid having to de-horn the rhinos in the first place. It’s a reactive strategy, to be sure. The logic is that the combination of real-time location data and smart poacher cams will not only result in convictions, but also act as a strong deterrent. “This is all relatively new in the conservation space. We’ve just done a major introduction of rhinos into the park, and we’re pushing to get the horn transmitting right. Within six to 12 months, we’ll be off satellite tracking altogether. It will all be done through the wide-area network,” adds Craig Reid.

If he’s right, African Parks will have changed the world of safaris.

Already, the top rated luxury safari outfitters in the world, including andBeyond and Wilderness Safaris, are watching these developments very closely. In Rwanda’s Akagera National Park, for example, Wilderness Safaris’ Magashi Camp shares its game sightings data with African Parks, using similar software. Yet healthy skepticism remains, even among the most passionate conservationists.

“It’s critical that managers don’t look to technology as a panacea,” says Dr. Neil Midlane, Group Sustainability Manager at Wilderness Safaris. “Traditional strengths such as sufficient numbers of well-equipped personnel must first be in place. Then, the criminal justice system needs to be intact and functional. Once these elements are in place, strategic deployment of surveillance technology, along with appropriate data aggregation structures, can significantly increase the effectiveness of law enforcement efforts.”

All the money in the world doesn’t buy you a successful smart park. It takes will, dedication, and focused collaboration to save Africa’s endangered species. And if AI is acting as our eyes and ears, it’s clear we still need the human heart.