By NewsroomNovember 15, 2021Conservation
No Comments 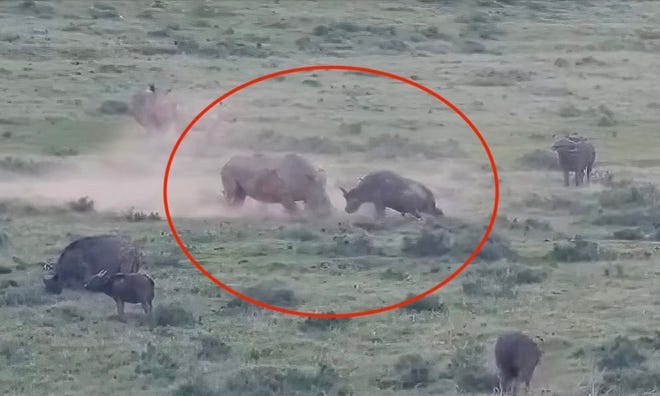 A white rhino and a buffalo face off. Image: Kariega Game Reserve.

A ranger in a South African game reserve has captured “extremely rare” footage showing a white rhinoceros in a head-to-head battle with a ferocious buffalo.

The tale of the tape favors the rhino – they can weigh nearly 6,000 pounds – but the 1,500-pound Cape buffalo proved a worthy and formidable opponent.

“The incredible strength of both species is on display here as well as the obstinate nature of the buffalo!” Kariega Game Reserve wrote on Facebook. “Completed with great commentary by the guests present.”

In the footage, best viewed with sound, other buffalo gather around the combatants as if to enjoy a better view. A female rhino and her calf observe from a safer distance.

Kariega Game Reserve stated that the male rhino had recently been trailing the female rhino and her calf and “is probably full of romance and testosterone.”

The reserve described what the tour group witnessed as “an extremely rare sighting.”