By NewsroomSeptember 20, 2020Rescue and rehab
No Comments 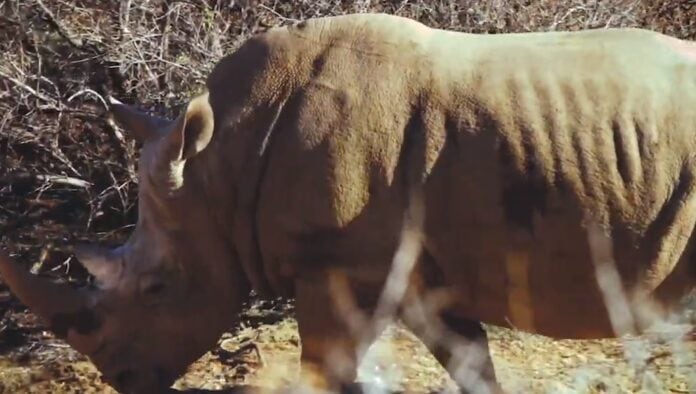 On the 21st of July, Wildlife ACT’s Community Conservation Manager and expert rhino tracker, Zama Ncube, and Priority Species Monitor Izzy Rowles, were on a monitoring session in Hluhluwe-iMfolozi Park, when they came across an agitated White Rhino cow. A few seconds later they heard the sound of a White Rhino calf calling. This is what happened next, as told by Izzy…

I found myself out in the field with Zama assisting with a rhino monitoring session. After 16 years, Zama has built up a knowledge and understanding of Black and White Rhino behaviour that is second-to-none.

Wrapping up a productive day in the field, we were walking back to our vehicle, when we saw an adult female White Rhino ahead. Watching from a thicket, we could immediately see something was wrong – she was in distress and pacing up and down, focusing her attention on one spot. Zama patiently assessed the scene, as the mother’s frantic feet sent clouds of dust billowing up into the afternoon sky.

Our immediate concern was that we had had no visual of her 4-week-old calf, which we had seen earlier that day. Zama recalled a natural drainage gully in this area, and we suspected that the calf may have fallen in. Once the mother had moved to anxiously wait on the far side, Zama cautiously approached, and beckoned us over to the large gully edge. As he climbed in to get a better look, Ezemvelo KZN Wildlife Technical Assistant, Erick Khumalo and I assessed from above, all the while keeping a watchful eye on the mother.

Visual of the Rhino Calf

Following the desperate cries, I located a clear track through the grass leading straight up to the edge. This must be the entry point. I couldn’t quite believe it when I got a visual of the tiny female White Rhino calf just 4 meters below my feet, huffing and puffing at her predicament.

We informed HiP Management and got planning how to best rescue the calf, as she squeaked desperately for her mother. We had two options, but having no rope to lift her up and out left us only one viable option – to manoeuvre her out of the gully in a series of stages. We planned a rough route. First out of the little gully, into the big gully, through a tunnel, then over some boulders and down a path leading to the base of our planned ascent. That was the plan anyway.

Between the three of us, we tried various techniques to capture her and progressively move her from one section to another, slowly and patiently winding our way out. From our improvised “charge-the-jumper-on-a-stick” technique, which we hoped she would build enough momentum to propel herself through the tunnel, to buckling our belts together and making an impromptu “dog leash” to catch, blindfold, and physically manoeuvre her through the tunnel ourselves, we wasted no time.

As concerns about daylight started setting in, we finally caught her. With Zama holding the leash tight, I jumped in to blindfold her. As she resisted, the leash snapped and gave way – leaving me trapped in the dirt-bowl with the feisty little girl. Fortunately, there’s only so much damage a 4-week-old White Rhino calf can do, yet as I was taking quite a beating, Zama and Erick jumped in to restrain her, and as we successfully blindfolded her, she immediately calmed down.

I removed my socks and stuffed one into each of her ears, to reduce stimulus and keep her calm. Between the two of us, we heaved, shifted and lifted that baby numerous times as we wriggled and wrangled our way through the labyrinth-like gully, finally reaching the base of the slope.

Despite our best efforts, the open space made it harder to manoeuvre her up the slope. By now we were all thirsty and exhausted and she wasn’t having any of it, so we took a break. With a stroke of luck, we heard distinct calls from mum above, resulting in an instant and complete transformation.

The calf was scrambling up the slope towards us with renewed vigour, desperately searching for the mother. I can say this is much easier when she wanted to do it! Two hours after initially stumbling across this scene, I clawed my way out of the gully, with the eager, squeaking calf in tow, and her anxious mother nervously looking on. She ran towards Erick, who helped lead her back to mum.

We were battered and bruised, covered in dust and sweat, panting and parched, minus one belt, but plus a very satisfying outcome. As we gathered our safely-stashed monitoring equipment and the dusty debris of our rescue operation, Dr Dave Cooper (Ezemvelo KZN Wildlife vet) arrived on the scene, ready to assist. He assessed the situation and the condition of both animals, and was pleased with the outcome. Fortunately, there was no need for veterinary intervention.

“It felt so great to succeed in saving that baby rhino, knowing that you are also playing a role in saving them since they are in bad times with poaching. Getting yourself in danger to save these animals, you feel like a hero and you just wish that everyone should learn and see the importance of doing that for the future of living creatures all over the world.” says Zama

With daylight dwindling, we gave mother and calf some space to reunite and recover from the stressful ordeal, and headed home for a well-earned dinner and rest.

By the following morning, my limbs and muscles had seized from the previous day’s exertion. I staggered and stretched my stiff body to the kitchen to boil a cup of tea, only to find Zama was aching just as badly. Nevertheless, we jumped into the vehicle and headed out for another day in the field, ready for whatever it might bring.

Following up on Mother and Calf

We are pleased to report that both mother and calf have since been seen together, in good condition. For reference (from my days as a rhino carer rehabilitating orphaned rhinos), one of our males weighed in at 79KG at 4 weeks!

Not only were we lucky to be out in the field in the right place and time, but we were lucky to have an expert like Zama, who immediately knew something was up, and guided us through the rhino rescue operation as a team, with a rational calmness and patience.

“Playing a positive role during this poaching crisis is very satisfying, especially knowing you are contributing to the survival of a species. Other than being a Rhino Monitor, I teach the community children about conservation and how important it is for the future. All wild animals need to be protected for future generations”, says Zama

This incident highlights why it’s so crucial to have boots on the ground, and get our monitors and field rangers out monitoring priority species daily, to detect, prevent and respond to emergencies such as this. We urgently need to raise awareness and financial support to continue our vital field monitoring efforts and keep our professionals in the field.