Watch: Sweet baby rhino ‘protects’ its mother from vets. What’s the sad truth behind its concern?

By NewsroomNovember 17, 2019Uncategorized
No Comments

In an adorable yet disheartening video, a baby rhino squeals and charges at the vets treating his injured and seemingly unconscious mother. While the baby rhino’s fierce attempts are winning hearts, the mother’s story appears to be a heart-breaking one.

Glimpsed in the video is the area of her head where her horn should be, but appears to have been gouged out (presumably by poachers). Rhinos have been relentlessly poached for their horns, to the point where all five surviving species of rhino are now classified as critically endangered.

Another catalyst to their extinction has been a rapid loss of habitat, while the murky rhino horn trade does not appear to be subsiding. In fact, it has been found that rhinos in the wild who have had their horns removed stand a statistically significant higher chance of surviving. 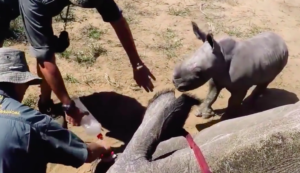 Screenshot from video published on Scroll In.

Here is a comprehensive list of the five species, and their current endangered population figures. The only three remaining northern white rhino were kept under 24-hour guard in Ol Pejeta Conservancy in Kenya.

Of them, the last male, Sudan, died at the age of 45 in 2018, and only two females (his daughter and granddaughter) remain. In May of 2019, Malaysia’s last male Sumatran rhinoceros, named Tam, died at a wildlife reserve, leaving just one surviving member of the subspecies, a female.

The need for artificial reproduction for these species may be the best way forward. Foundations like World Wildlife Fund (WWF) have also been working on rhino conservation by expanding protected areas, improving management, security and policies regarding these areas.

Moreover, if the exploitative horn trade industry continues to thrive, the demand for which is driven by the perceived medicinal value of the rhino horn and the status symbol of owning one, current numbers will never match the fight against poaching.

Below are two videos, one of the last two Northern White Rhinos on earth in August 2019, and one of baby rhinos in sanctuaries during playtime as they learn to charge at each other.