By Peter BorchertJuly 21, 2021Editorial
No Comments 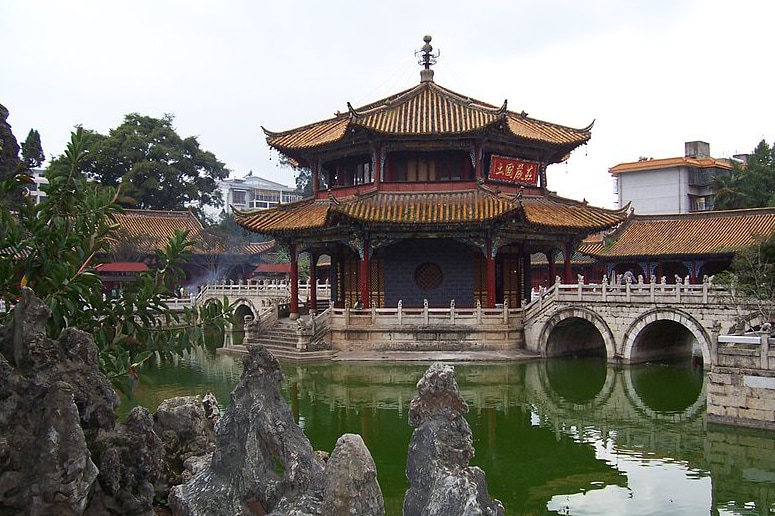 The city of Kunming in southern China has been an important commercial hub for well over 2,000 years, profiting from its position along ancient caravan trading routes, the somewhat romantically termed “Silk Road.” The days of Marco Polo and other merchant adventurers who forged 13th-century links between East and West are long gone, but the commercial imperative thrives. The Silk Road now has a new iteration as part of the Belt and Road initiative, a massive infrastructural undertaking that President Xi calls the “project of the century,” said to attract $1.3 trillion by 2027. While this happens, the NGO Green Kunming hopes to ensure that “everyone protects the environment, and that all creatures live together harmoniously.”

It will be a tough job. From a cluster of small settlements dating back to 279 BCE, Kunming is now home to almost seven million people and growing. If situated in the US, the city would rank a close second to New York in population size, but in China, it only ranks 18th. Yet, despite its prominence in China a year or so ago, I would have been willing to bet that very few people in the West had heard of Kunming in southern China. But this changed almost overnight and for the most unexpected reason.

In the spring of 2020, a group of elephants left their forest sanctuary in the deep south of Yunnan Province and headed north. Nobody knew where they were going, but many months later and hundreds of miles into their adventure, it seemed that they were en route to Kunming, Yunnan’s capital. However, on reaching the city’s outskirts, and with some human intervention, they turned westwards and slightly to the south. Currently, the wandering pachyderms are moving around within the limits of Yuxi, which, although itself a city of some 2.5 million humans, is little more than a village compared to its big sister, Kunming, slightly to the north.

For a while, the elephants held China and the rest of the world in thrall. Everyone waited with bated breath as to what would happen next as they got closer and closer to Kunming. At one stage, the global networks were carrying daily updates on the elephants’ progress. Experts are still none the wiser regarding their motivation. All the monitoring team can do, is continue using a combination of food and road closures to avoid interaction between the animals and local communities in a region where people have little or no experience of human-elephant confrontation.

My fantasy is that the elephants’ wanderings have been anything but random and that they deliberately headed for Kunming. Their purpose? Well, quite clearly, they are a delegation on behalf of wildlife and wilderness to a significant upcoming event in the city—the 15th meeting of the Conference of the Parties (COP 15) to the UN’s Convention on Biological Diversity (CBD). The conference was initially set for the end of May this year, but the global disruption caused by the Covid-19 pandemic upset the plan, and it has been deferred until October. The human organizers were predictably remiss in not getting the change of date notice to the elephants, who now have to self-isolate for a few months until the time comes to march into the city and present their position. I have no doubt it will be a stinging rebuke for how we humans have been grossly mismanaging the environment of the planet that is home to all life. After all, China’s elephants have first-hand experience of this—once widely distributed in this vast nation, today, there are only about 250 living in a couple of reserves in southern Yunnan.

Most thinking humans would agree with the elephant’s accusing trunk pointing directly at our kind. The Intergovernmental Science-Policy Platform on Biodiversity and Ecosystem Services (IPBES), which provides scientifically credible and independent up-to-date assessments of the state of the natural world, puts it baldly in its latest report: “Nature and its vital contributions to people, which together embody biodiversity and ecosystem functions and services, are deteriorating worldwide.”

But few have made this point as forcibly as UN Secretary-General António Guterres. At Columbia University in December last year, he said: “We are facing a devastating pandemic, new heights of global heating, new lows of ecological degradation and new setbacks in our work towards global goals for more equitable, inclusive and sustainable development. To put it simply, the state of the planet is broken.”

Doyen Canadian scientist Hubert Reeves once commented: “We are at war with Nature. If we win, we’re lost.” Echoing Reeves, Guterres went on to state: “Humanity is waging war on nature. This is suicidal. Nature always strikes back—and it is already doing so with growing force and fury. Biodiversity is collapsing. One million species are at risk of extinction. Ecosystems are disappearing before our eyes. Deserts are spreading. Wetlands are being lost. Every year, we lose 10 million hectares of forests. Oceans are overfished—and choking with plastic waste. The carbon dioxide they absorb is acidifying the seas.”

His litany of ills relentlessly covered air and water pollution, the disruption of wilderness by humans and their livestock, global warming, and the way we continue to flirt with climate catastrophe, increasing apocalyptic fires and floods, cyclones and hurricanes, and soaring carbon dioxide and methane levels.

Guterres also pointed to the emphatic link between climate and Nature. “It is time to flick the green switch,” he said. “We have a chance to not simply reset the world economy but to transform it…there can be no separating climate action from the larger planetary picture. Everything is interlinked—the global commons and global well-being. That means we must act more broadly, more holistically, across many fronts, to secure the health of our planet on which all life depends.”

None of this is new, of course, for we’ve been telling ourselves this story ever more stridently for almost 30 years.

In 1992, governments, indigenous groups, and non-governmental organizations (NGOs) from around the world met in Rio de Janeiro, Brazil, to confront the harm being done to Earth at the hands of man. The event became known as the Rio Earth Summit, and the world leaders gathered there agreed on the importance of protecting the environment for everyone. This recognition led in the following year to the international Convention on Biological Diversity (CBD) to protect Nature and biological resources. The treaty has three goals: to protect biodiversity, to use it wisely without depleting or destroying it, and to share its benefits equally.

An entire generation has passed since the Rio Earth Summit and the lofty ideals it embraced, yet sadly—despite some successes—a better world has not been delivered. Guterres’ long lament is a testament to this. And the question remains as to why the global community has failed to sufficiently address the intertwined issues of climate and biodiversity? The answer to this is in three parts. First, the signatory governments did not deliver effective domestic laws to underpin the vision of Rio. Secondly, there has been no credible oversight to enforce delivery. And thirdly, the principles of the Rio Summit were expressed too ambiguously in terms of the actions that were, and still are, needed.

The Kunming summit will be the 15th meeting of the parties since the inauguration of the treaty in 1993, and one has to ask if it will be able to deliver where the 14 previous meetings have failed.

The Secretariat of the CBD has just released the first draft of a new global biodiversity framework to guide actions worldwide through 2030 and beyond. It sets out an ambitious plan for implementing “broad-based action to bring about a transformation in society’s relationship with biodiversity, ensuring that by 2050 the shared vision of ‘living in harmony with nature’ is fulfilled.” The document sounds wonderful and is packed with ambitious targets, goals, and milestones, but it is hard not to feel with mounting despair: “Well, here we go again.”

In its own words, the CBD secretariat stresses that “Successful implementation will also depend on effective outreach, awareness, and uptake by all stakeholders, a comprehensive system for planning, monitoring, reporting, and review that allows for transparent communication of progress, rapid course correction, and timely input in the preparation of a post-2030 Global Biodiversity Framework.” Can this really happen in a world so riven by division, one-upmanship, and leaders, apart from a few autocrats, obsessed with short-term strategies for staying in power and not upsetting business?

No question, we urgently need to mend the planet, and quickly. Sadly, however, like children reluctant to eat the food put in front of them, we are almost certain to witness nations endlessly pushing commitments around on the plate, trying hard to appear as if momentous things are being done while accomplishing very little.

I desperately want the elephant delegation to Kunming to be heard and, even more importantly, to leave happy with the summit’s outcomes. But I fear it won’t happen.