We have all heard the familiar chant ‘Save the Rhino’ for years. This is why we should

By NewsroomOctober 24, 2021Conservation
No Comments 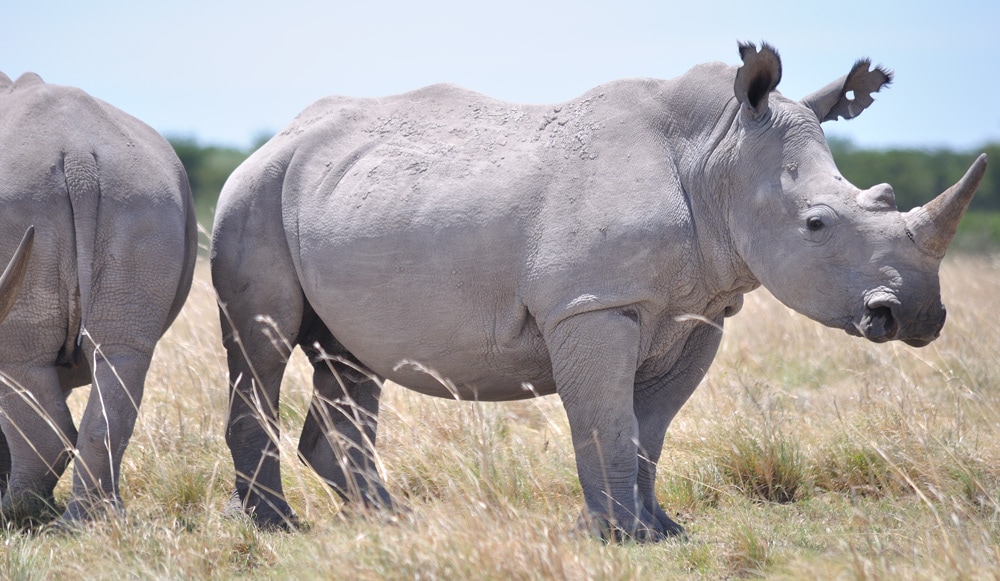 It’s important to save the rhino. Image: Wikimedia Commons.

As an environmental journalist, I often cover stories relating to wildlife and habitat conservation, something that I enjoy very much.

Last week, I was invited to a local community engagement event hosted by a conservation non-profit based in northern KwaZulu-Natal. Having never been to an event like this, I graciously accepted the invite.

The community is situated on the outskirts of a major game reserve with only a fence separating the dangerous wilds from playing children and washing on the line.

The authorities see it as a way of preventing the animals from wandering outside the park and creating possible conflict with humans.

The community sees it as a way of keeping them out of ancestral land and stopping them from hunting, something they have always done.

We were outside, it was a pleasant day. Chairs were placed in a crescent shape facing a large tree, this is where our audience sat. Goats bleated in the nearby kraals and chickens scratched and scurried around.

It began with the usual presentations by important spokespeople from the many departments and facets of conservation but the speaker who really captured my attention was a young, black man with a commanding voice and warrior-like stature.

He spoke to the local community, a small village really, about the importance of protecting our natural resources. He too covered the usual science and then touched on the economic benefit that eco-tourism brings to South Africa.

The smooth, bellowing voice then asked the rather bored-looking audience if they had any questions.

After a few minutes of silence and awkward coughs, an elderly gentleman stood up. One hand on an old cane, dark trousers with a light blue button-down and a navy pullover. The audience fell silent.

“I have a question for you. Why should we protect the rhino?” the elderly man asked in a low, raspy authoritative voice.

The young man answered almost instantly. In a robotic, rehearsed paragraph, he recited all the usual points. “If we don’t protect the rhino, they will go extinct. Future generations will not have the opportunity to see a rhino.”

The young speaker pondered for a moment; the old man had a point. In actual fact, losing the rhino will not affect the ecosystem as much as we think it would.

Rhinos are not a food source for predators and do not contribute significantly to the structure of the ecosystem. If they went extinct, the only real impact would be felt by the very same criminal syndicates who brought about their demise. But would the poaching stop?

No. The young gentleman perked up. “What do you think will happen if the rhino went extinct?” he asked the crowd. Silence. “Poachers will move on to the next seemingly powerful animal and wipe them out. The cycle will continue until nothing is left. Then what do you think criminal syndicates are after?

Expert Africa stated in July this year that “people had been turning to witchcraft “because of the mistaken belief that using their body parts in potions can bring good luck and wealth”, adding that “the majority of victims have been children.”

Muti (traditional medicine) killings have been on the rise in South Africa with a man recently sentenced to 24 years in prison after murdering and trying to sell the body parts of another man with another group of men currently in court for the murder and dismembering of a 13-year-old albino female and her 15-month-old cousin. The men planned to sell the body parts to traditional healers.

The old man nodded in silence. It may not happen in his lifetime but it may affect his children or grandchildren. The young speaker did acknowledge that conservation should not separate local people from ancestral lands and that conservation authorities will be looking at ways to involve local communities in conservation.

My answer would have been a lot less morbid. We must conserve the environment and all who live in it simply because every life form, no matter how small or big, has as much right to be here as we do.