What next after the wildlife census?

By NewsroomJanuary 4, 2022Conservation
No Comments 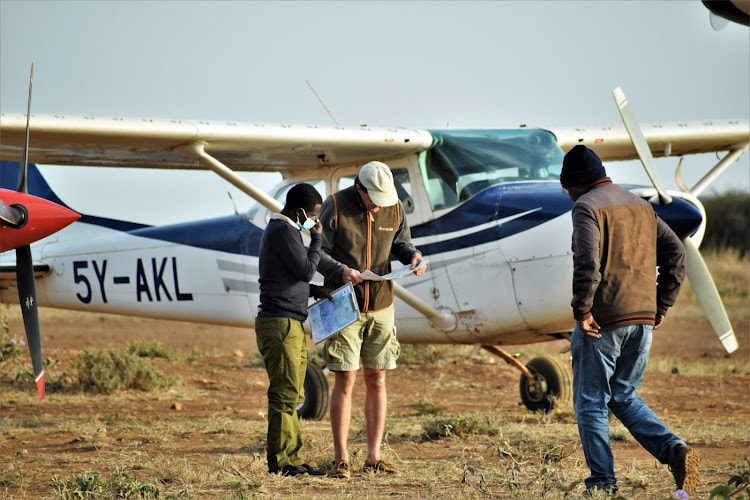 Save the Elephants pilot Miles Geldard confirms with an observer on the transect routes to cover before embarking on the census at an airstrip in Mpala Centre on July 3. Image: As originally published by The Star.

The government conducted a national wildlife census this year.

The census covering both the land and aquatic wildlife was launched on May 7 by Tourism CS Najib Balala at Shimba Hills National Reserve in Kwale county.

The Sh250 million drive was fully funded by the government and was executed by the Ministry of Tourism and Wildlife, the Kenya Wildlife Service and the newly created Wildlife Research and Training Institute.

The census report showed that Kenya has 36,280 savanna elephants, which is the fourth-largest population in the world after Zimbabwe, Botswana and Tanzania.

The elephants, according to the report, are spread across 13 ecological units which include protected areas and adjacent community areas.

The units form the five main contiguous elephant ranges as highlighted in the previous strategy.

These include the northern coast (the Tsavo-Chyulu-Amboseli Kilimanjaro complex), the Aberdare (Mt Kenya-Laikipia-Samburu-Northern Area complex), the Nguruman (Mara Serengeti complex) and Nasolot-Rimoi-Kerio Valley.

The Tsavo ecosystem accounts for more than 37 per cent of the national elephant range, which is estimated at 49,000km2. It is followed by the Samburu-Laikipia ecosystem with 37,937km2.

The Mara and Amboseli West Kilimanjaro ecosystems accounted for 11,681km2 and 37,937km2 respectively.

Tsavo ecosystem hosts the largest wild elephant population of 14,879, representing a density of 0.33 jumbos per km2.

The Laikipia-Samburu-Marsabit ecosystem had the second-highest population with 6,950 elephants–a density of 0.2 elephants per km2.

The Laikipia-Samburu-Marsabit had 6,867 while the Maasai Mara ecosystem had 2,595 jumbos.

“The elephant range area has continually increased in Kenya in the last two decades. This has been mainly due to changes in the aerial census blocks to incorporate areas where other monitoring approaches have generated new knowledge on elephant presence,” the report said.

It showed there was an interaction between the Tsavo, Amboseli, and Mara ecosystems, hence the need to expand the elephant census blocks for the respective ecosystems.

The report showed that the elephant range extends beyond the protected prea, heightening human-elephant conflicts.

Overall, there has been a more than 2.6 per cent annual population increase since 1989.

Kenya, the report said, has the third-largest population of rhinos in Africa after South Africa and Namibia.

Kenya is implementing the sixth edition of the Black Rhino Action Plan (2017-2021) which seeks to have a meta-population of at least 2,000 black rhinos of the eastern African subspecies.

The overall goal of the strategy is to achieve a meta-population of 830 black rhinos by the end of 2021.

The country’s black rhinos are conserved in nine states, four private, one county and one community land across the country.

The census report said the rhino population grew by 7.7 per cent with the national population estimated at 1,739 individuals (897 black, 840 southern white, and two northern white) as of July 31, 2021.

The census report showed that Solio Ranch has the single largest population of white rhinos. It hosts 58 per cent of the national white population and is one of the highest rhino densities in the world at 6.99 rhinos per km2.

This has been a modest growth rate despite the global poaching spike experienced from 2008 to 2014 with a peak of 59 rhinos poached in 2013.

In the last 15 years, 249 rhinos have been killed, mainly due to illegal demand for their horns.

Attempts to save the Northern White Rhino (NWR) through natural processes have not been successful.

Buffalo is one of the most abundant and widely distributed species in Kenya and among the big five iconic species.

During the census, only those in the open savannah ecosystem were counted using the aerial total count method in 14 sites.

The number of buffaloes counted was 41,659 animals.

The Maasai Mara ecosystem recorded the highest number of buffaloes in the country (11,604), representing 28 per cent of the total population.

The four ecosystems account for about 78 per cent of total Kenya’s buffalo population.

The lion population has been on the decline for the past two decades.

Concerted conservation efforts have led to a gradual recovery of the population to the current estimate of 2,589 individuals.

Conservationists have raised the alarm over rampant land subdivision that is breaking large community-owned lands into thousands of privately-owned parcels.

“Even if the land is subdivided, it is important to have proper land use plans. Our Constitution asks counties to develop county spatial plans. These are plans that would have been very useful as they define what goes on in one area and the other,” she said.

Githaiga said since poaching has been reduced, the increase in the wildlife population comes with challenges.

“The habitat where they live is not expanding, the land is still the same, people are settling in areas where we have corridors,” Githaiga said.

Githaiga said the value that communities get from conservation needs consideration even as the numbers grow.

“We are also looking at climate change and the changing ecosystems. The areas that have water in the park did not have it some years ago. This means that the habitat is also changing,” she said.

Githaiga said corridors must be left open for wildlife to move from one place to the other.

He said migration of wildlife is an entire ecological process, which helps move nutrients, creates biodiversity and interlinkages between habitats and promotes resilience to climate change.

But their migratory corridors and habitats have been encroached on.

Itela urged the government to implement the report on corridors that was launched in 2017. The report identified 58 migratory routes and corridors.

It called for the mapping and securing of wildlife corridors as a strategy for reducing human-wildlife conflict and promoting environmental sustainability and equitable social development.