Why did the woolly rhino go extinct?

By NewsroomDecember 2, 2020Science and technology
No Comments 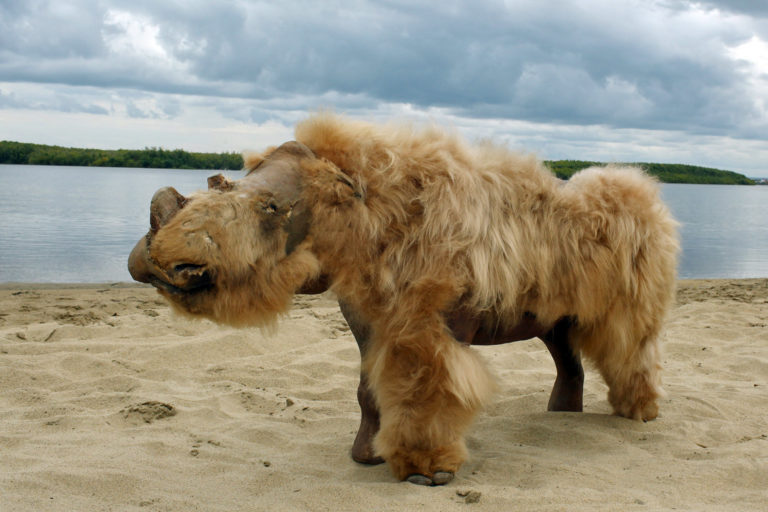 Recreation of a woolly rhino made from a preserved baby woolly rhino discovered in Siberia. Photo credit: Albert Protopopov as originally published by Mongabay.

In the arctic tundra of northeastern Siberia lies a graveyard of a now-extinct species of megafauna, the woolly rhinoceros, dating back 50,000 years. Now, a new genomic analysis of the remains of 14 of these fantastical furry yellow creatures shows that climate change was the likely culprit for their disappearance—not hunting by migrating humans, as scientists had assumed.

“We can say that climate probably did have a huge role in the extinction and decline of woolly rhinoceros,” said paleogeneticist Edana Lord of Stockholm University and the Swedish Museum of Natural History, lead author of the recent study in Current Biology. However, Lord and her colleagues cannot rule out human activity as a contributing factor in the rhinos’ final years.

Woolly rhinos (Coelodonta antiquitatis), predecessors to the modern-day Sumatran rhinoceros (Dicerorhinus sumatrensis), roamed Siberia tens of thousands of years ago. Both the arrival of humans in their range and a climate warming period, known as the Bølling-Allerød interstadial, coincide with the disappearance of these ancient SUV-sized animals.

Scientists obtained 14 specimens in the form of 12 bones, a mummified tissue biopsy, and a hair sample. By determining the full DNA sequence of one of these remains, and the maternal DNA sequence of all 14, researchers hoped to expose key parts of their history.

They zeroed in on mitochondrial DNA—DNA passed through the mother—which revealed a diverse rhino family tree. However, if hunting or other human activity had decimated their population, their genetic diversity would have declined noticeably, Lord said.

Instead, the species’ number remained constant until close to their extinction, and long after humans migrated into their range. The team’s specimens date as recently as 18,500 years ago; the species persisted another 4,500 years.

Further analysis of the rhinos’ genetic mutations over time pointed to evolutionary adaptations driven by the changing climate. In 89 genes, scientists found changes that likely led to cold-adapted traits. Such adaptations suggest that woolly rhinos were adjusted to a cold environment and could not adapt to a warmer, wetter climate.

Despite these clues, researchers can’t rule out that humans played a part. While woolly rhinos and humans appeared to live in harmony for thousands of years, early human settlers in Siberia were nomadic. Once the nomads created permanent settlements, changes in food sources and habitat could have harmed the rhino population—but genetic data alone is unlikely to show this.

“Whether or not they were actually killed or hunted by humans is very difficult to tell,” said wildlife geneticist Alfred L. Roca of the University of Illinois at Urbana-Champaign, who was not involved in the study.

To even suspect human interaction, Roca said, researchers would have to find remains that “looked like they were butchered by humans,” as was the case with woolly mammoths. “Whether humans at the end had something to do with [the woolly rhino extinction] is an open question, only because humans have had so much to do with driving other species extinct,” he noted.

The rapid warming period 14,000 years ago mirrors our planet’s inflamed temperatures now. Finding intact specimens of animals from such eras provides clues about what might be in store for species today—including us. However, uncovering these samples is rare, and isolating their fragile DNA is no easy feat. For instance, fragments of bone, like those used by Lord and her team, often degrade over time and become contaminated with bacterial DNA as they decompose.

Despite these challenges, Lord is passionate about the impact her research has on illuminating both our past and our present. “I like bringing these extinct creatures to life,” she said. “How past climate impacted species is incredibly important for how future climate is going to impact species.”

Editor’s note: text in this story was changed on December 1, 2020 to clarify the framing around Alfred L. Roca’s quote. The piece originally stated “To prove human involvement …” but that was replaced with “To even suspect human interaction.”

Carolina Cuellar Colmenares (@Wzrd_of_Lnlynss) is a graduate student in the Science Communication Program at the University of California, Santa Cruz. Other Mongabay stories produced by UCSC students can be found here.