By NewsroomMay 12, 2020Conservation, Tourism
No Comments

On regular days, the Narok-Sikinani road is a busy thoroughfare as vans transport groups of tourists in and out of the Maasai Mara Game Reserve.

This newly-tarmacked road is the gateway to the world famous safari destination. 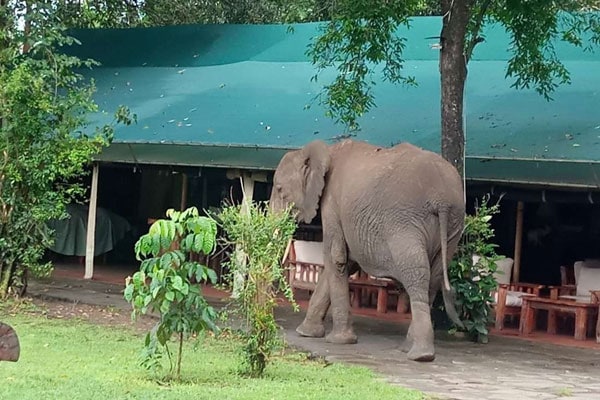 Original photo as published by The Daily Nation. An elephant is pictured at Governor’s Camp in the Maasai Mara Game Reserve following reduced human activities over the Covid-19 pandemic, May 6, 2020. PHOTO | GEORGE SAYAGIE | NATION

Today, the 86-kilometre stretch is almost devoid of traffic. Not a single tourist has visited the Mara in more than 60 days.

Senior Warden Alex Sindiyio told the Nation that nature was taking a much deserved break.

“The animals are now at peace. They’re roaming freely and grazing without distractions,” Mr Sindiyio said.

Every year, the Maasai Mara, known for its large population of lions, leopards, cheetahs, elephants and millions of herbivores, hosts over 300,000 domestic and international tourists.

March, April and May may be low tourist months, but never before in its almost 60-year existence has the 1,510 square-kilometre reserve been as deserted as it is presently.

Narok Governor Samuel Tunai noted that, even during turbulent times in the country, the Mara has always had visitors. A total shut down, though, is unprecedented.

“The only time the park has been nearly as deserted was during the 2007/2008 post-election skirmishes when tourist numbers fell drastically,” said Governor Tunai, who is also the tourism and wildlife committee chairman at the Council of Governors.

The absence of human beings in the park due to the Covid-19 crisis, though, is a blessing in disguise according to Governor Tunai, who said the animals were on holiday.

“This crisis will allow us to look at what we’ve been doing wrong. As custodians of the Mara, conservation comes first for us. Going forward, we might have to limit the number of visitors so that the animals aren’t disturbed,” he said.

With no tourists visiting the national reserve, waste has also been controlled.

While the park management is strict on littering, some tourists still dump bottles and snack wrappings that ecologists warn not only threaten the safety of wildlife but also change their behaviour.

There has also been a lot of rainfall since the beginning of the year, the highest in more than 20 years, according to senior chief park administrator Christine Koshal.

Roads in the park are always under maintenance for ease of movement of tour vehicles, but some of them have fallen into disuse and are flooded. With most workers sent home, maintenance has had to stop.

Mara Triangle CEO Brian Heath fears that, if the rains continue, the roads might be rendered impassable.

The annual wildebeest migration is near. In a month’s time, millions of gnus will begin the march north, only this time, the phenomenon that pulls thousands of tourists to the banks of Mara River will exclusively be nature’s affair.

Presence of tour vans in the reserve boosts safety of the animals by warding off poachers, according to the park management. Now, the animals, especially rhinos and elephants, have become more vulnerable.

Patrols have been stepped up with rangers and officers from the General Service Unit (GSU) and Tourism Police dispatched to the Mara to protect wildlife and investors’ properties and to monitor the porous border with Tanzania that poachers like to use to cross between the two countries.

When normal human activity returns to the Mara in the next few months, the quiet and natural order will once again be thrown off-balance.

For now, the animals will continue to enjoy the monopoly of the wild.