I can’t say where I found them and I’m not allowed to say how many; but there I was staring at a crash of black rhinos as they fed less than 50 meters away.

Slack jawed and exhilarated, I nearly forget the camera in my hand.

The rhinos stopped feeding and turned in our direction and then in unison they advanced, trotting toward our small group.

I held my breath, as the rhinos pounded the earth.

Then a light wind blews over us, and just as suddenly as they started, the rhinos stopped, turned, and ran away.

In what direction – I can’t tell you. I’ve promised. It’s part of the agreement visitors are required to sign in order to accompany a tracker, from Save the Rhino Trust, for the day at Desert Rhino Camp.

This I can tell you, we rose before the sun on a misty morning and set out to track the critically-endangered black rhino in the Palmwag Concession’s near half-million hectares. Between the trackers, guides and other guests, there were fewer than a dozen of us. 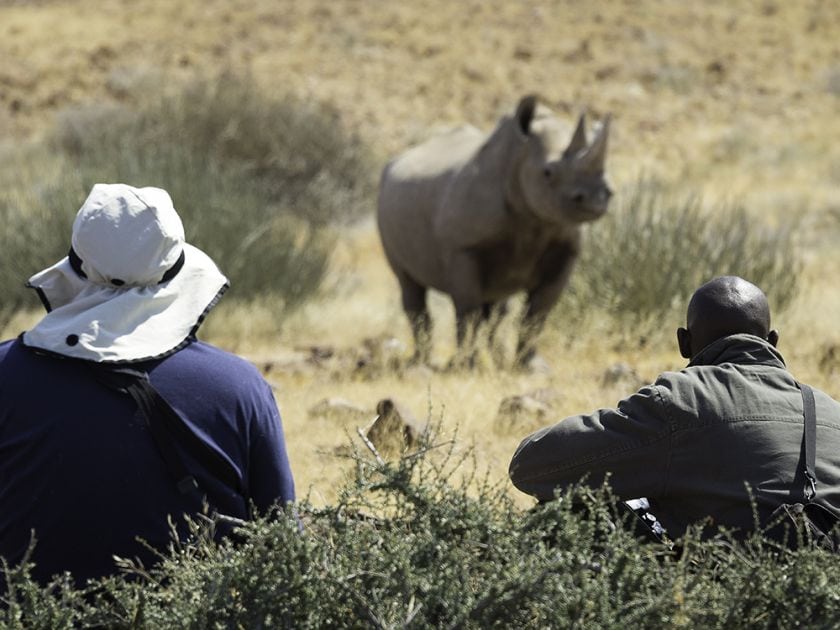 It was mandatory we turn off our phones’ GPS and location services before setting out so that poachers can’t decode the data in any photos we might share on social media or in this article.

We used a Land Cruiser to access the area and then on foot we followed the trackers’ sign language. Single file we walked over a modest incline of basalt, beaten red by the sun, before getting the signal to fan out.

And that’s when we saw the rhinos.

Save the Rhino Trust has been working for more than 35 years to rehabilitate a black rhino population devastated by poachers, dropping by 98 percent between 1960 and 1995 alone.

Here, in the Palmwag Concession, there were fewer than 50 black rhinos when SRT came in. How many there are today, I can’t say, because they won’t tell me — not even a hint. It’s a matter of protecting the growth of the species.

My guide, Jimmy Limbo met me at Windhoek Hosea Kutako International Airport, where we boarded a six-seater Cessna 210 that would carry me to three camps across northern Namibia, touching down each time on an even more remote runway.

When you travel with Africa Dynamics to Wilderness Safaris camps, the journey is part of the adventure.

Blazing red flat-top peaks become overexposed dry plains, cracked clay earth, and oceanic-like dunes as the Cessna approaches my next stop: Damaraland Camp, where only an afternoon game drive can tempt me away from the shaded poolside lounges.

Jimmy, a born-and-raised Namibian, is a veteran guide who speaks 17 languages (Italian is his favourite). Point to anything on the landscape and he’ll tell you a story about it, and then he’ll point out something you didn’t even know to look for.

As his passenger in the custom-chopped, Toyota Land Cruiser, I learned to scan the horizon, with anticipation each time he stopped the vehicle.

Spot an animal before Jimmy does and you earn your bush eyes — something I’m determined to do. There are myriad chances at this rustic-tented camp. Giraffes graze in the distance. Hyena cubs hold down a nearby den.

Jimmy shows me tracks in the sand: elephant, ostrich, hyena, lion, as he drives the path, marked by nothing but two tire grooves,

We pass through the valley, over a dune and into a dried riverbed, where an oasis blooms. Silence falls over the truck, our eyes busy searching.

“Yeah, the ostrich are cool,” I say, watching their feather-duster bodies bounce with each step. “But I was talking about the elephant.” On an elevated ridge just beyond the ostrich, an elephant raises dust, his massive pads plodding across the sand.

Soon our vehicle is in a maze of rocks, trees and more than a dozen elephants. To our right, a family pulls at the branches of a tall ana tree. The largest passes barely a meter in front of us. The mother follows, her year-old calf scurrying a beat behind.

Up close, the elephants look shrunken, their leathery skin swinging in stride. “That’s the desert adaptation,” Jimmy explains. The animals here are smaller and thinner than their jungle counterparts — there’s just not the same access to food and water. The diet makes for truncated tusks as well, consequently protecting the animals from ivory poachers.

At Serra Cafema, the most remote camp in the Wilderness Safaris portfolio, my stilted chalet overlooks the Cunene River, home to long, thin crocodiles. The river creates a natural border between Namibia and Angola to the north.

From my private open-air living room, I watch baboons scaling Angola’s craggy coast, a lone palm tree seemingly out of place on the shore. The main draw at this newly reopened camp isn’t the wildlife, however; it’s a chance to visit it’s people.

Come morning, Jimmy drives through the dunes to a valley, where a dozen or so dark-brown structures stand in a circle. They belong to a community of semi-nomadic people known as the Himba.

“Moro, moro!” I greet the women (the men are at work) after Jimmy asks whether it’s a good day for visitors. “Wapenduka, good morning!”

Himba women glow desert red, their skin massaged with a paste of ochre clay and animal fat. It’s a natural sunblock, bug repellent and beauty statement, and when mixed with herbs makes for a peppery perfume. Their braided hair indicates stage of life, with subtle modifications depending on what’s in vogue. Styled animal hides hang from thick belts on their bare waists. When they walk, it’s with swagger.

The women laugh when Jimmy introduces me — “Hannah” has scatalogical meaning in Himba. They’re shocked that I have no children or cows, and offer me a husband (Himba are polygamists) upon learning that I’m unwed.

Even with a river breeze, afternoons at Serra Cafema are brutally hot (and best spent in the dunk pool). But a couple hours before sunset, I brave the heat, tempted once again by adventure. This time I have my own set of wheels: a quad bike.

With Jimmy in the lead, I test the terrain, carving deeper grooves in a set path meant to preserve the fragile environment. It’s an incredible and rare opportunity to tread lightly on pristine land, to experience Namibia’s shifting dunes and crumbly hillsides.

But it’s a race against the fading light. The schist rock ridges glow purple and black, greeting the deep terracotta of sand as the sky melts into a kaleidoscope of matching hues. I pause, the quad quaking beneath me, and pay witness as the Namibian sun bids farewell. It casts its final wink by wrapping the land’s wild tones into a visceral postcard for me to carry on the long journey home.