Wildlife crime arrests up in 2019 (Namibia)

By NewsroomApril 9, 2020Uncategorized
No Comments

Arrests for wildlife crime involving high-value species like elephants, rhinos and pangolins, increased by 36% in 2019 compared to the year before.

This was disclosed in the 2019 combating wildlife crime report, which was jointly compiled by the environment ministry’s intelligence and investigation unit and the Namibian Police’s protected resources division.

“This report is the result of systematic data gathering and reporting on wildlife crime,” noted the director of wildlife and national parks in the ministry of environment, Colgar Sikopo.

In the introduction to the report, Sikopo explained that various stakeholders and partners, including the environment, the safety, and justice ministries as well as the Anti-Corruption Commission (ACC), the Namibian Defence Force (NDF) and others, played a vital role in aggregating the statistics. 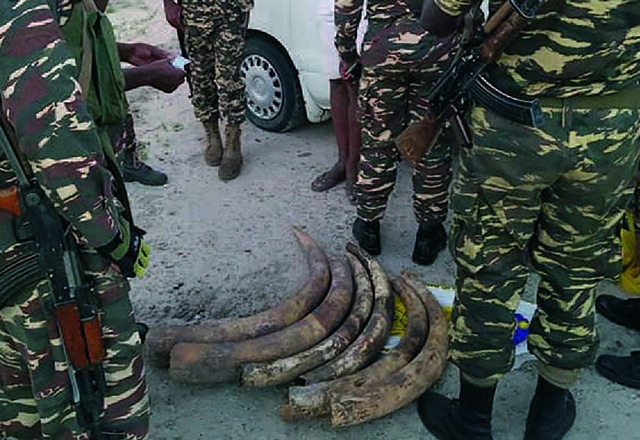 Original image as posted by The Namibian: SEIZED … Officers from the Ministry of Environment, Forestry and Tourism, Namibian Defence Force and the Namibian Police, are the foundation of wildlife crime prevention in the country. Photo: 2019 Combatting Wildlife Crime Annual report

He also said these efforts have allowed for more comprehensive statistics to be shared with the media and the public, to the benefit of the country’s anti-poaching efforts.

“This has led to a surge in coverage on wildlife crime, which has facilitated public awareness and understanding, and also serves as a stern warning to criminals,” he said.

The report, which was released last week, indicates that in 2019, more than 360 arrests related to poaching of high-value species were made. One-hundred of these arrests were related to elephants, 160 to pangolins and 112 to rhinos.

Sikopo said wildlife crime remain a serious threat to Namibia’s economy and biodiversity, as well as to local livelihoods.

The report reveals that the pangolin is by far the most-targeted high-value species with 21% of all registered cases recorded in 2019 involving this nocturnal animal. “These are often trafficked alive, [and] most live animals that are seized can be rehabilitated and released,” the report states.

The Namibian previously reported that of the 121 pangolins confiscated by law enforcement officers in Namibia last year, about 60% were dead.

While Namibia’s increase in the number of arrests for wildlife crime is commendable, only 11% of reported cases related to high-value species last year were finalised. About 77% of cases registered during that period are ongoing while 4% were withdrawn or struck from the roll and 8% are listed as ‘unknown’.

According to the report, the capacity of the judicial system to deal with all registered cases is often stretched given that wildlife crime makes up only one facet of crime in Namibia where the system is inundated high rates of homicide, rape, domestic violence and fraud, among others.

The report elaborated that sensitive cases, including all those related to rhinos, must be submitted to the prosecutor general’s office, lab results from ballistics and DNA analysis take time and securing legal representation for the accused often causes postponements.

“These factors can lead to lengthy prosecution delays. It may thus take years for complex cases to be finalised. The importance of effectively prosecuting wildlife crimes is nonetheless recognised and a variety of initiatives are being undertaken to ensure more efficient finalisation of cases, the report states.