Wildlife crime unit still not up and running despite promises 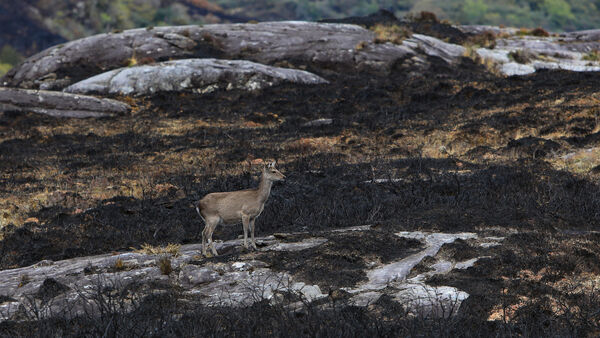 The aftermath of the devastating fire in Killarney National Park, a hind sika deer standing near the entrance of Glaishin na Marbh and the Eagles Nest, along the Long Range River. Image: As originally published by Irish Examiner.

There is still no timescale on the establishment of a wildlife crime unit, despite its formation being announced nearly a year ago.

The current biodiversity crisis in Ireland, as well as increasing crimes against animals such as deer, hares, and birds, prompted Heritage Minister Malcolm Noonan to announce the formation of a dedicated unit within the National Parks and Wildlife Service (NPWS) last October.

The proposed unit was broadly welcomed by biodiversity and environmental activists.

Campaigners have long called for the NPWS to be given sharper enforcement teeth.

However, the Department of Housing, Local Government and Heritage told the Irish Examiner that it could not give firm details as to when it would be up and running.

A spokesperson said: “The NPWS is still engaged with regards to its establishment. Details on staffing numbers, locations and a timescale for the unit are not currently available.

“However, in advance of it being established, this department and minister Noonan have been working on strengthening the response to wildlife crime, and in June of this year, the NPWS signed a memorandum of agreement and launched a joint protocol with An Garda Síochána.”

The protocol between gardaí and the NPWS is seen as a bridging of the gap until the new wildlife crime unit is set up.

Mr Noonan said in June: “There have been a number of devastating wildlife crimes in recent years, including the shooting dead and poisoning of birds of prey, poaching, wildfires and the persecution of badgers, and they need to be tackled head on.”

A review of the NPWS took place earlier this year and the findings are also with the department.