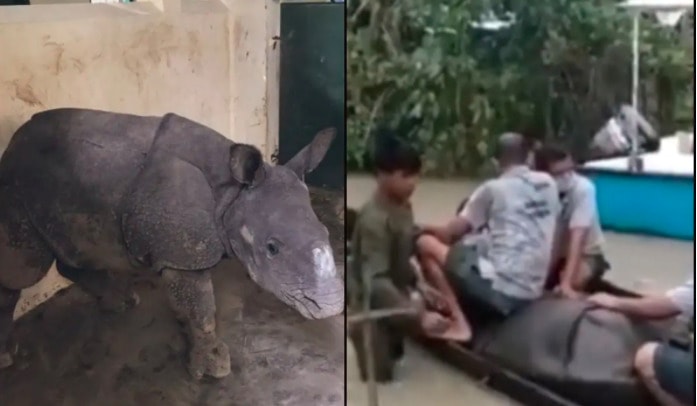 As Brahmaputra floods its river banks and devour most parts of Assam, 90 percent of the Kaziranga National Park are still underwater along with 99 anti-poaching camps as a result of which several hog deer, wild boar, wild buffalos, swamp deer and four rhinoceros died by drowning in the floodwaters. In a rescue operation carried out by Kaziranga National Park and Centre for Wildlife Rehabilitation and Conservation (CWRC) officials, a rhino calf was recently saved after high flood in the Agartoli range separated it from its mother on July 14.

While the officials could not locate its mother, the baby rhino has been brought to the rescue centre and is being taken care of. In a recent tweet, Wildlife Trust India shared that the calf “will be hand raised and rehabilitated at the wildlife rescue centre #CWRC along with other rhinos that are undergoing rehabilitation (sic).”

Giving an update on the baby rhino’s stable health, the Kaziranga National Park and Tiger Reserve tweeted, “Good Morning Everyone A female rhino calf which was rescued 2 days back is really doing well in our rescue centre CWRC (sic).”

As per the latest reports, the deteriorating flood conditions in Assam in 27 districts has affected nearly 40 lakh people. The death toll in the state has reached to 71. Over 49,000 people have taken shelter in 303 relief camps while landslides due to the torrential downpour has further worsened the evacuation operations by the NDRF, SDRF and the respective district administrations.