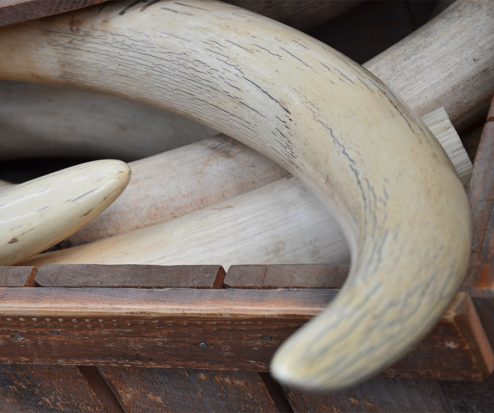 Pressure is growing on financial institutions to toughen their approach to environmental crime, with G7 leaders vowing to crack down on the illicit fund flows supporting wildlife trafficking and campaign groups warning that the activity has morphed from a conservation issue to a financial crime concern.

In a communique issued ahead of June’s annual G7 summit, the finance ministers and central bank governors of Canada, France, Germany, Italy, Japan, the UK and the US jointly sounded the alarm that greater attention is being paid to wildlife trafficking.

The problem has grown much more severe in recent years, with Traffic – a campaign group tackling wildlife crime – saying that the illegal wildlife trade is now believed to be the fourth-largest illicit transnational activity in the world.

According to the UN, illegal trafficking and other wildlife crimes generate US$7-23bn per year in illicit cash. When combined with illegal fishing and logging, the World Bank estimates that annual proceeds could total as much as US$2tn.

Financial crime authorities have given increasing attention to the topic, particularly after a detailed report on wildlife crime from the Financial Action Task Force (FATF), an influential standards-setting body, published in June last year.

That report warned that soft commodities trading networks are being exploited to conceal the trafficking of illegal wildlife and animal products, citing examples where multi-million-dollar shipments of ivory and pangolin scales were disguised as legitimate tea and frozen fish exports.

“The attention of the FATF has been a call to action within the financial industry,” says Scott Grob, director of anti-money laundering at the Association of Certified Anti-Money Laundering Specialists (ACAMS) and a former senior executive at HSBC and Deutsche Bank.

“This is important because with so much money involved in this activity, there will be financial footprints, and there will inevitably have been some trade element to it; you simply can’t run an operation of this size on cash alone,” he tells GTR.

“Also, with Covid-19, the travel restrictions meant there was a shift away from smuggling items on-person and towards shipping cargo or air freight. That has also resulted in a shift to a more sophisticated approach, with intermediary countries and warehouse techniques.”

At the same time, researchers are increasingly uncovering links between the illicit wildlife trade and organised criminal groups, which are historically more associated with trafficking drugs, weapons and other contraband.

As a result, for banks involved in international trade – particularly those financing or handling transactions involving animal products and other high-risk commodities – there are growing concerns of inadvertent exposure to organised criminal activity.

According to ACAMS’ Grob, wildlife trafficking “has moved from being a conservation issue into an organised crime issue”.

“There are a few reasons why organised criminal groups have moved into this area,” he says. “One is that this has not necessarily been a priority for law enforcement – it’s been under-funded and under-resourced, compared to the efforts put into chasing other crimes.”

“Law enforcement like the photo-op, the big seizure of smuggled goods, but they rarely have resources to trace and act upon the financial transactions behind that. Subsequently, it can be easier to seize the cargo and arrest some of the people involved than having a long drawn-out investigation that takes a lot more time and effort.”

Citing the ivory trade as an example, he points out that local conservation efforts have been highly successful at tackling poaching and related issues at source – but because demand for those products have stayed constant, the potential margins “have exploded”.

“So if you’re already involved in arms smuggling, counterfeit trade or human trafficking, then wildlife trafficking becomes a very attractive business,” he says.

Europol, the top policing agency across Europe, has led the charge on attempting to disrupt shipments of illegal goods.

Between November 2020 and June 2021, it carried out its fifth annual Operation Lake exercise – a 24-country joint effort to block the trade of protected European eels, whose populations have declined by 90% in recent years.

It undertook nearly 60,000 cargo inspections across Europe and made 52 arrests, seizing more than 400kg of eels valued at over €1mn. Cars, boats and other assets were also seized.

In another sting late last year, Europol coordinated the arrest of 21 suspects in the UK and Spain believed to be involved in illegally trafficking numerous reptile species. Police also seized items worth €800,000 and several firearms, including a submachine gun.

But equivalent action against the financial institutions and trading companies involved in such transactions remains scarce.

Pioneering research by the Royal United Service Institute (RUSI), a London-based security and financial crime-focused think tank, has found that enforcement action targeting wildlife trafficking is rarely accompanied by investigations into the flow of funds.

In a case study of the West and Central African region published in April this year, RUSI interviewed 89 key stakeholders and 12 financial intelligence units (FIUs) on their approach to the financial dimensions of illicit wildlife trade (IWT).

“Only one FIU considered itself to be regularly involved in the investigation of wildlife cases. Only 25% of the FIUs that responded to the survey reported ever having conducted a financial investigation related to IWT.

“No country had completed more than one wildlife-related financial investigation. None led to a prosecution for money laundering or another financial crime.”

However, the same report found that over the past five years, West Africa has emerged as “a major source and transit hub” for environmental crime. The “industrial scale” of such activity points to the involvement of organised criminal groups, it adds.

It says Nigeria is now the “top global point of export” for ivory and pangolin scales, according to records of seizures. Along with rosewood, the three products account for the highest volume of transnational IWT flows.

The growth of this industry has been astonishingly rapid. The known quantity of pangolin scales shipped from Nigeria has increased from around 10,000kg in 2016 to nearly 53,000kg in 2019, and has also grown significantly in shipments from the Democratic Republic of Congo.

At the same time, 93% of all forest elephant ivory seized between 2006 and 2014 originated in Cameroon, the Republic of Congo, Gabon and the Central African Republic, it says. Elephant populations have plummeted by an estimated 70% in some of those regions.

In terms of export destinations, around 90% of global ivory seizures are made for cargo destined for China or Southeast Asia, the report says.

RUSI argues that existing tools for fighting money laundering, corruption and fraud should be deployed to tackle wildlife trafficking, including that enforcement authorities carry out financial investigations as well as cargo seizures.

Alexandria Reid, a research fellow at RUSI’s organised crime and policing team, says that attitudes among law enforcement authorities are changing, but too many “still see seizures as a metric of success, and that’s fundamentally flawed when we’re facing an extinction crisis”.

“With forest elephants listed as on the ‘brink of extinction’ in March this year, we are genuinely facing a world without some of our most iconic species,” she tells GTR. “Inaction is unacceptable.”

Banks on the front line

Generally, the financial services industry has been increasingly active in seeking to cut out illicit wildlife trade. A financial task force convened under United For Wildlife in 2018 now has 44 signatories pledging to share resources and intelligence to disrupt environmental crime.

Some of the largest trade finance banks are task force members, including ABN Amro, BNP Paribas, HSBC and Standard Chartered. US banking giants JP Morgan and Wells Fargo are also signatories, as are non-bank payment providers such as MoneyGram, Western Union, Tenpay and Safaricom, which operates mobile money network M-Pesa.

However, a report published by Traffic in April this year urged banks in China to commit to a zero-tolerance policy for illegal wildlife trade, warning they have both significant exposure to illicit imports from Africa and a growing role in the global financial system.

And although banks are expected to report potentially suspicious activity to authorities, RUSI’s Reid points out there can be “a sense of frustration within the financial sector” about whether that information is ever acted upon.

“While they are asked to file more suspicious transaction reports and do more around this issue, it is unclear to them to what extent any reporting will be followed up by law enforcement,” she says.

Grob points out that simply increasing the compliance burden on banks could mean only the largest institutions have the resources to tackle wildlife trafficking effectively.

“For the financial industry, this means looking at trade invoices, financing arrangements, and shipping and logistics documentation,” he says.

“But, on the other hand, a lot of the smaller banks don’t really have the resources, and even with mid-size to larger banks, it takes time for the policies and techniques to take shape.”

Grob calls for more effective training for bank staff on potential red flags, rather than increasing regulatory complexity and “creating an incredible bureaucracy”.

Reid gives the example of a 2019 UN report showing rosewood stocks had declined in three specific Nigerian states, indicating that illegal trade had shifted away from the port of Lagos and towards Port Harcourt.

“It follows that a bank or transport company seeing lots of transactions or business activity related to timber coming out of Port Harcourt should be alive to the heightened risk they might be exposed to,” she says.

More generally, she says illegal wildlife products are often co-packed with other commodities such as ginger, plastic pellets or cashews to disguise them in transit.

“A large purchase of these goods without a legitimate commercial purpose is therefore an example of a basic red flag that could be used to inform compliance procedures,” Reid says.

“Banks and transport sector companies can use this readily available intelligence to inform their due diligence and transaction monitoring practices – but only if they’re truly paying attention to environmental crime in the first place.”