By NewsroomMarch 9, 2021Anti-poaching, Education, Science and technology
No Comments 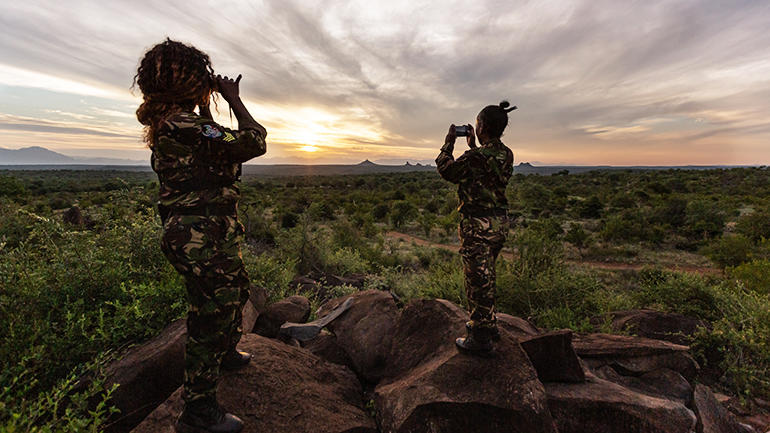 Samsung Mobile has teamed up with Africam to launch Wildlife Watch, a two-month pilot project running until 2 May that gives anyone with an internet connection the chance to monitor live video from Balule Nature Reserve in South Africa, report any suspicious incidents, and donate to support the Black Mambas Anti-Poaching Unit. The latter is a pioneering all-female, unarmed, team of rangers who patrol the 500 square kilometres of the Balule reserve daily, checking for poachers and evidence of their activities such as wire snares and fence break-ins.

As well as providing public-facing video streams from wildlife hotspots, Samsung Galaxy S20 FE smartphones will monitor the reserve’s fences and be issued to rangers to support their daily operations. One handset will also be fitted to a camouflaged jeep to deliver live-streamed video from surveillance patrols.

Mark Notton, senior director of Mobile Products at Samsung Europe, outlined the genesis of Wildlife Watch: “Last year we started thinking about the activities we could do around using tech for good — how can we use our technology to add value to an area that needs support? A second aspect was one of the initiatives we announced at CES, around upcycling and repurposing devices for other means. We wanted to showcase both those areas and looked around the world at projects that needed help, were particularly relevant, and where we could make a difference.”

At Balule, Samsung’s smartphones augment existing Africam CCTV infrastructure, which utilises wireless mesh technology and the Vodacom network. Two of the video streams at wildlife-watch.com are mounted Galaxy S20 FE phones, while the other two (which pan, tilt and zoom) are CCTV cameras. “We’ve also equipped all the rangers with devices — this is a two-month project, but they’ll continue to use the technology through their day-to-day lives,” Notton said. The mounted Galaxy S20 FE phones are encased in a box that gives protection from the elements, as well as the attentions of animals, and are powered via solar panels.

The combination of imaging quality — particularly low-light performance — and battery life were key to the selection of the midrange Galaxy S20 FE for duty in the field, Notton told ZDNet. The handset is also IP68-rated for dust and water resistance.

Key to the choice of Balule Nature Reserve as the location for Wildlife Watch was the presence of the Black Mambas Anti Poaching Unit. “The team on the ground is all-female, and the impact that the Black Mambas have, in the role they play in their communities, goes far beyond just the protection of animals. When we heard all of this, it just felt like the right one to support,” Notton explained.

So how is Samsung’s technology making a difference on the ground? “It’s actually been a bit of a game-changer for us,” Craig Spencer, CEO of the Black Mambas, told ZDNet. “There are two components: the cameras on the landscape with the live feeds, and the handsets that are deployed in the field with the Mambas. That gives us real-time tracking of the rangers, and they feel a lot safer: if they come across a pride of lions or poachers, or whatever it might be, we can see exactly what they see, and we can get there within minutes. It’s no longer sitting on the radio, going ‘where are you, I’m on my way’, and we don’t have to decipher everybody’s pocket-books to figure out what they saw. Now, it’s all tracked and tagged, and everything is digital.”

“We’ve got one mobile unit on an old beaten-up four-by-four, which we park in places where we suspect poachers might come in and out, and within twenty-fours that thing detected a gunshot — it’s not just the visuals, the audio is useful as well,” said Spencer.

The phones play another important role, relaying what the Black Mambas do day-to-day and increasing awareness of the importance of wildlife conservation in the wider community, said Black Mamba ranger Leitah Mkhabela. “Before we had the phones, our kids would ask what happened at work, and we had to sit down while we were cooking and tell them everything that happened in the bush. Now I just open my phone and show them when we are on patrol, what we saw – they really enjoy it when they see lions and elephants on video. They go to bed happy!”

Education is a vital element of the Black Mambas’ work, Spencer said. “We have the Bush Babies program, which is ten primary schools, 1,300 kids and a big resource centre, and at any one time there are seven Black Mambas operating in the schools, teaching the kids. We thought: ‘why don’t we put in a Wi-Fi connection and have a live stream of these cameras, so the kids can actually see?’ Instead of having to dress up in a rhino outfit and dance on the stage, or ask them to draw a picture of a hippo based on a picture book, we can actually beam it directly into the classroom.”

The Black Mambas project had resulted in a decrease in poaching, Mkhabela told ZDNet, but the coronavirus pandemic created extra pressure on the reserve. “We thought we were going to struggle during the pandemic because so many people who worked at the lodges — the guides and the trackers — went home, and only the Black Mambas were left in the reserve to work. People in the villages were suffering, not getting salaries, and were coming into the reserve to set snares and catch impala or warthog to feed their families. The Black Mambas put boots on the ground and remove those snares, so people know it’s not good to kill animals.”

But crucially, the reserve team offers an alternative. “We encourage people to start up businesses, selling tomatoes and growing vegetables, so they can feed their families,” Mkhabela said. “We also ask for donations, and go to the communities and feed people who are not getting salaries. People are happy when we give them food, and they see that the Black Mambas are in partnership with them.”

All of the Black Mambas come from nearby communities, and are unarmed, because, Mkhabela said, “we don’t want to go back to our villages where there are widows and orphans, and kids growing up with anger, wanting revenge.” So even though poachers are usually armed, with guns or knives, the Mambas “fight this in a different way,” Mkhabela said. “When we see them, we just hide, and report all the information — using the Samsung phones.”

This policing model is loosely based on the traditional bobbies-on-the-beat principle, Spencer said: “Unarmed eyes and ears, visual policing – it’s a deterrent, and a disruption of the landscape”. But as with unarmed British policemen, firepower is available if necessary: “Behind every Black Mamba team there is a small unit of armed guards that will back them up immediately. That’s where the technology comes in – the response time has been reduced to minutes.”

“For too long in Africa, we’ve tried to fight fire with fire: we always thought the arms race with the poachers was in the weaponry. We realise now that it’s actually in technology: we were filling in notebooks and drawing on maps with crayons, and the poachers were running around with phones – they leapfrogged us in the 21st century.”

As well as combatting poachers, the Black Mambas have blazed a trail for women in conservation in Africa. “When we started it was difficult — many people thought we wouldn’t make it because we were women coming into a man’s world,” Mkhabela recalled. “But then we did our training, passed and started working, and people have seen how successful we’ve been. We have become role models in the villages, and people want to do the job we are doing.”

Finally, how has the Wildlife Watch project gone since its launch on March 3? “We had 2,600 people ‘take the watch’ in the first twenty-four hours,” said Samsung’s Mark Notton. “That equates to 540 hours of people around the world doing two things: being entertained by amazing footage, and contributing as well.”