By Peter BorchertJanuary 5, 2022Editorial
No Comments 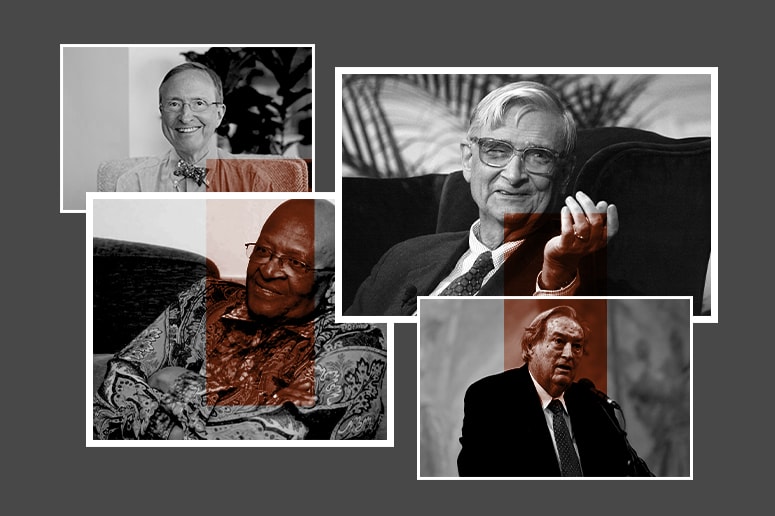 There is a word we use in South Africa that describes human relationships: Ubuntu.
It says: I am because you are. My successes and my failures are bound up in yours. We are made for each other, for interdependence.
Together, we can change the world for the better.

The weeks bridging the end of 2021 and the beginning of 2022 have been scarred by the sad loss of several giants in the world of conservation. E. O. (Ed) Wilson died on December 21, Desmond Tutu and Thomas Lovejoy on Christmas Day, and, three days ago, Richard Leakey passed away. They leave giant boots to fill.

The “Ant Man,” aka Edward Oswald Wilson, was undoubtedly one of the foremost scientists and philosophers of our time. As a youngster, he was already fascinated by nature, but his lifetime obsession with ants—hence the moniker—came about due to a childhood accident while fishing. He caught a pinfish and pulled too hard on his line. His prey flew into his face, one of its spines piercing his right eye, the wound eventually leading to the removal of the lens. Notwithstanding the loss of stereoscopic vision, he could still focus on the detail of the bodies of smaller creatures. “I noticed butterflies and ants more than other kids did, and took an interest in them automatically,” he commented in later life.

At the age of 18 and already determined to be an entomologist, Wilson began a survey of the ants of Alabama. His work resulted in finding the first colony of fire ants in the United States, a species that would become a serious pest in the southern states. This was just the beginning: he went on to discover more than 400 ant species and proved that these highly social creatures used pheromone excretions to communicate with fellow individuals within a colony. As a young scientist, Wilson also realized that life only made sense “in terms of evolution and the idea of natural selection.”

Throughout his career, Wilson wrote, and wrote, and wrote. His literary productivity was astounding: the Good Reads website lists no fewer than 157 books either written by him alone or in collaboration with others. However, although widely respected for his work, some of his thinking and writing was not universally well-received and caused lasting differences with several academic colleagues, notably Steven Jay Gould, and the political status quo. One of his most controversial works was Sociobiology: The New Synthesis, which argued that all human behavior was a product of genetic pre-determination, not learned experiences. This re-awakened the nature versus nurture debate and drew widespread criticism, even accusations of racism and sexism. However, Wilson didn’t back down, referring to the attacks as “self-righteous vigilantism.”

From the 1980s, Wilson, appalled at the already apparent and progressive loss of the world’s biodiversity, began his crusade to preserve and protect wild places and the life they harbor. His endeavors led, in 1992, to what is possibly the best selling of all his books, The Diversity of Life. Erudite and eloquent as ever, Wilson set out the harm our species has wreaked on the planet. He maintained that while the physical damage can be halted, biodiversity loss and species extinction are far more complex. Indeed, they are irreversible.

But he remained optimistic to the end, believing as he once remarked in an interview: “I think we can pass from conquerors to stewards.” Wilson’s death at 92 marked the end of a truly remarkable life in the service of nature and science. Often referred to as “The New Darwin” or “Darwin’s natural heir,” his honors, prizes, and awards are too numerous to list. He received more than 150 prestigious awards and medals around the world, as well as more than 40 honorary doctorates. He was also an honorary member of more than 30 world-renowned and prestigious organizations, academies, and institutions.

Wilson once described his religious beliefs as provisional deism. “I drifted away from the church,” he said, “not definitively agnostic or atheistic, just Baptist & Christian no more.” By contrast, God and religion remained the driving and guiding forces of Nobel Peace Prize laureate Desmond Tutu throughout his remarkable life.

Most will immediately associate Tutu with his priestly office, his anti-apartheid activism, and his role as co-chair of South Africa’s Truth and Reconciliation Commission, a court-like restorative justice body assembled in South Africa in 1996 after the end of apartheid. But he also championed the cause of conservation and, particularly, the need to take immediate and lasting action concerning climate change.

Tutu was always alert to any aspect of social injustice wherever it occurred, and he saw action against climate change as a moral obligation. He consistently highlighted the plight of the poor and vulnerable as the most severely affected communities by drought, global warming, sea-level rise, and the severe and unpredictable weather events resulting from climate change.

“We, who should have been responsible stewards preserving our vulnerable, fragile planet home, have been wantonly wasteful through our reckless consumerism, devouring irreplaceable natural resources,” he charged. “We must stop climate change. And we can if we use the tactics that worked in South Africa against the worst carbon emitters.” Of course, the tactics he was referring to were those argued in the 1980s against the country’s apartheid government. Tutu believed that the companies and individuals who did business with South Africa at that time were complicit in supporting a corrupt and immoral system. Similarly, he saw those who profit from the planetary harm and human suffering caused by the burning of fossil fuels as reprehensible.

“We can encourage more of our universities and municipalities, foundations, corporations, individuals, and cultural institutions to cut their ties to the fossil fuel industry,” he exhorted in The Guardian ahead of the UN Climate Summit in 2014.

Furthermore, he consistently called upon governments everywhere to cease subsidizing fossil fuels; and resist further exploration for new fossil energy sources. He believed in the power of collective action to hold the perpetrators of environmental damage accountable for cleaning up their mess. One can’t help but feel that he would have been delighted by the recent court ruling compelling Shell to cease their seismic survey off South Africa’s East Coast.

“Who can stop climate change?” he challenged. “We can. You and you and you, and me. And it is not just that we can stop it, we have a responsibility to do so that began in the genesis of humanity…”

Just as cancer finally claimed the life of South Africa’s “moral compass” on Christmas Day so, on the same day, it brought the life of Thomas Lovejoy, the “Godfather of biodiversity,” to a close.

“We should be at war with ourselves and our lifestyles.” Lovejoy once remarked, adding, “The natural world in which we live is nothing short of entrancing—wondrous really. Personally, I take great joy in sharing a world with the shimmering variety of life on earth. Nor can I believe any of us really want a planet which is a lonely wasteland.”

Lovejoy was indefatigable and outspoken in his championing of the Amazon, where he had worked since 1965. Few scientists have served the planet in so many capacities. For example, for 14 years, he directed WWF-US’s conservation program, then moved on to the Smithsonian Institution, where he held several senior positions, before becoming the chief biodiversity adviser to the president of the World Bank. He was also the senior adviser to the president of the United Nations Foundation, chair of the Yale Institute for Biospheric Studies, and was a past president of the American Institute of Biological Sciences and the Society for Conservation Biology.

In National Geographic’s tribute to this extraordinary biologist, Christine Dell’Amore wrote that Lovejoy remained an optimist despite his focus on some of the world’s toughest environmental challenges. “We all have an interest in fixing this [climate change] before it gets badly out of hand,” he told the magazine in 2015, “and it’s getting close to that. There are things we can do together. There are energy and innovation possibilities. There are biological solutions that would benefit everyone.”

Just as Lovejoy fought for the survival of the Amazon, so Richard Leakey championed Kenya as a place of supreme paleontological significance and a focus of African biodiversity. This larger-than-life, swashbuckling fossil hunter, politician, and conservationist, never shied away from confrontation or controversy. He was a big man with a big ego. Although revered by many, he was a fearsome adversary when crossed. Unsurprisingly, he made some powerful enemies.

Triumphs and setbacks marked his walk through life, but his ability to bounce back from adversity was unparalleled. This quality applied as much to his political career as it did to his private life. In 1993 Leakey lost both legs after a light aircraft he was piloting crashed in the Rift Valley, where much of his palaeontological research had been done. Sabotage was suggested but never proved.

Two years later, Leakey and his political colleagues were whipped and clubbed by a mob outside a Kenyan courthouse. This awful incident, which sparked international outrage, followed a vitriolic verbal attack on Leakey by President Daniel arap Moi. Moi alleged that Leakey, the person he had appointed in 1989 to head what would become the Kenya Wildlife Service, was now a “foreigner,” a racist, an atheist, and the agent of a Kenyan terrorist organization to boot.

Neither his physical disability nor the assault lessened Leakey’s resolve to fight wildlife crime and corruption within Kenya’s government and civil service. In fact, despite his fractious relationship with Moi, in 1999, the president unexpectedly appointed Leakey as head of Kenya’s civil service. His brief was to rescue the country from an economic crisis caused by its notoriety as one of the world’s most corrupt states. Many doubted his ability to turn the tide, but Leakey was as determined a human being as you could wish to find. “If you want something done by me,” he once famously declared, “suggest it can’t be done.”

Leakey did manage to improve relations between Kenya and international lending institutions. For a while, it seemed as though he might succeed in removing nepotism and corruption from the country’s bureaucracy. But it soon became evident that he was too much of a threat to powerful forces within the government, and in 2001 he stepped down without any public explanation.

Leakey’s political career may have been an unending rollercoaster ride, but his contributions to paleontology and conservation are undisputed. His research and hominin discoveries were seminal in establishing Africa’s status as the birthplace of humankind. And his tough, uncompromising stance did quell Kenya’s poaching wars in the 1990s.

In 2015, the 70-year-old Leakey returned to the institution he was instrumental in founding when he was invited by President Uhuru Kenyatta to chair the Kenya Wildlife Service. Instead of applying his usual aggressive approach as might have been expected, he used these latter years to raise international funding for the agency and find ways to resolve conflict between people and wildlife.

The world is a lesser place for the passing of these four titans.