With the increased number of Javan rhinos, what is the next conservation goal for these animals?

By NewsroomOctober 12, 2021Conservation
No Comments 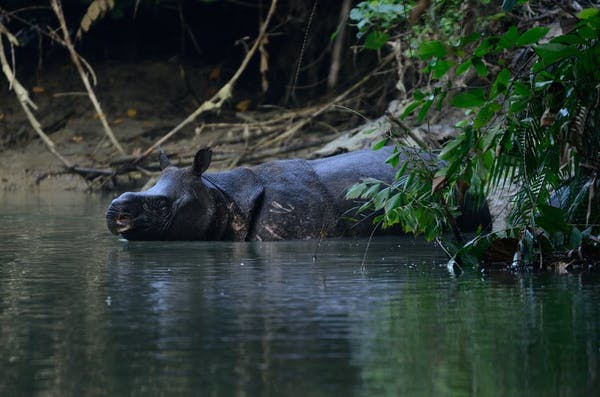 It’s incredible that the Javan rhino (Rhinoceros sondaicus) can still be found on the island of Java, one of the world’s most densely populated islands. It’s even more remarkable that the rhino population in Indonesia has tripled since the 1960s.

The Javan rhino was once found throughout many parts of Asia, but outside Indonesia its population has continued to dwindle. With the loss of the last individual in Vietnam, Indonesia remains the only country that has been successful in protecting the species.

As its population has increased, is the animal now safe from extinction?

Unfortunately, no. Javan rhinos are still classed as “critically endangered” by the International Union for Conservation of Nature (IUCN).

There are an estimated 74 individuals in existence – that’s not a large number for the global population of a species. To bring Javan rhino further away from the risk of extinction, conservation efforts must continue and even scaled up.

Because of its small number, the Javan rhino population is particularly vulnerable to stochastic or random natural events, which are difficult to foresee and control. These include demographic dynamics (such as changes in sex composition and age group), genetic processes, and disasters that may lead to their extinction.

For a small population living only in one area, a single catastrophic event might wipe out the entire species.

In a large population, the risk becomes lower. Even if such accidents occur, the chances are high that a number of individuals will survive and preserve the species.

Javan rhinos are also vulnerable to human threats and fragility of their habitat condition. Their habitat is prone to rising sea levels as a result of tsunamis or global warming.

Tsunami risk area due to earthquakes which can be either due to plate tectonic or volcanic related to activities of the nearby Mount Krakatoa.

Another issue is that most of the Ujung Kulon area, which directly borders the open waters of the Sunda Strait, is still relatively open access. Illegal activities could endanger rhinos and other wildlife in the vicinity.

A number of fishers use certain areas of the national park to hunt for fish or seek shelter from storms. Some sites in the area are also deemed sacred and serve as pilgrimage sites for people from all over the region.

Rhinos in Ujung Kulon are also quite vulnerable to the emergence and spread of disease outbreaks. This could come from visitors, livestock, or pets living in the area and its immediate vicinity.

Some diseases have been reported in the western part of Java that may infect rhinos, including Septicemia Epizootica (snoring sickness), anthrax (mad cow disease) and surra (blood infection). Some of these illnesses have even been found in the rhinos’ immediate environment.

At the very least, there are at least five objectives that must be met to reach the goal of bringing Javan rhinos further away from the extinction risks. Officers and partners of the Ujung Kulon National Park have been working on some of these objectives in the field for a long time, and continue to do so. Others can be improved, while conservation efforts that appear to be inactive must be reenacted.

The first is ensuring stronger protection against poaching, whether they are targetting the rhino or other species in the rhino habitat.

Second, regularly monitor, prevent and cure diseases and other dangerous substances. Humans, livestock and other sources that might be the cause or intermediary of a disease must be contained and avoided.

Third, improve Javan rhino habitats to ensure conditions are favourable for their reproduction. One way is to monitor and control invasive or/and alien species, such as through programs that help contain the spread of Langkap plants (Arenga obtusifolia).

Although they are locals, langkap plants spread quickly and widely throughout Ujung Kulon and are believed to have taken over habitat areas where plants favoured by rhinos – such as putat (Planchhonia valida), kijahe (Cronton auypelas) and kililin (Podocarpus amara) – are known to grow.

Demographic balance and rhino genetic enhancement at the individual and population levels must also be maintained. These can be accomplished through science-based habitat management. Habitat management should be done hand-in-hand with other conservation efforts, such as individual-level monitoring.

The fourth task is to appropriately plan for habitat improvement and expansion in Ujung Kulon and other locations.

Several parties have considered developing improvement and extension of rhino habitats in additional areas such as Mount Honje, Gunung Payung, and Panaitan Island. The habitat expansion idea is worth considering. Because those areas are still within Ujung Kulon National Park, the decision-making process for this plan should be relatively easy.

Several places outside the park, such as the Cikepuh Wildlife Reserve in Sukabumi, West Java, have also been surveyed for the possibility of establishing a second Javan rhino habitat. This lengthy procedure, which began several years ago, must be continued and updated based on the most recent field experience and expert knowledge.

The fifth and final step is population monitoring through extensive, in-depth and integrated ecological and social studies. There are still many unanswered questions about the Javan rhino’s population and ecology, as well as its relationships with other animal species, as competitors or facilitators.

Studies and efforts to manage rhino populations, which are part of the animal community in the lowland rain forest ecosystem of Ujung Kulon, have so far paid little attention to interaction among species.

Another point to consider is habitat dynamics. This may include mature forest that naturally lead to climax condition, in which the vegetation in the forest tend to remain steady and relatively stable for a long time.

On one hand, such conditions are required for the general conservation of biodiversity. However, climax conditions could reduce the availability of rhino food in the lower stratum.

The importance of science-based management

The rhino conservation efforts above are much more effective and measurable if supported by rigorous scientific processes, including robust methods and comprehensive data.

All relevant and best-available information and expert knowledge must be considered before taking a course of action.

For sure there will always be some unknown aspects of Javan rhino biology that need to be studied. For such situations, conservation managers and researchers may perform management actions with a framework of experiments and field trials, guided by precautionary and scientific principles.

Observation and documentation of these conservation processes, outcomes and impacts must be thorough. These notes will be used to evaluate management practices and improve future efforts.

The government as the lead agency need to actively engage the community and essential conservation partners.

The rhino is a species that has drawn considerable interest locally, in Indonesia, and around the world. However, it may not mean much if all that attention can’t be used as a driving force to strengthen conservation efforts.