By NewsroomOctober 20, 2019Uncategorized
No Comments

Ancient Britain was home to a menagerie of long-forgotten creatures – including woolly rhinos and the cave lion.

We reveal some of the most exotic animals to roam the British Isles over the last 2.6million years.

The woolly rhinoceros was an ice age mammal coated in thick fur to protect against cold weather.

Just like modern rhinos, they were large and strong – but maintained a strict plant-only diet.

An adult woolly rhino typically measured up to 12.5 foot in length, and weighed as much as 2,700 kilos.

They could also grow up to 6.6 foot tall, and had horns roughly two-foot long.

And they common in southern England, which was a cold and arid desert at the time. 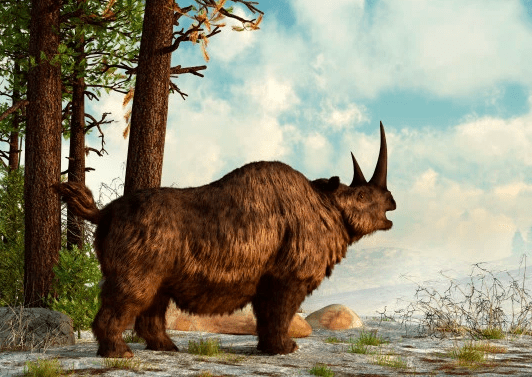 Original illustration as published by The Sun: Woolly rhinos were coated in thick fur and could weigh 2,700 kilos. (Credit: Alamy)

The Eurasian cave lion, or Panthera spelaea, is an extinct species.

It evolved in Europe less than 600,000 years ago, and is genetically distinct from the modern lion found in Africa and Asia.

The oldest bone fragments of Eurasian cave lions date back around 62,400 years.

The species finally became extinct around 13,000 years ago.

They would have stood roughly 3.9 feet tall with a body length of around 6.9 feet.

Experts say the species may have been around 10% larger than modern lions.

They were probably similar in colour to modern lions, although slightly lighter.

They roamed from Europe to Alaska over the Bering land bridge, and were even found in Spain and the UK.

The cave bear is a now-extinct species of bear that lived across Europe and Asia.

They were bigger than grizzly bears, reaching 5 feet tall and 10 feet long – and weighing up to 600 kilos (and possibly even 1,000 kilos at the extreme end).

Cave bears would have had broad domed skulls with steep foreheads, and boasted stout long bodies.

Despite their fearsome appearance, they were likely largely vegetarian, although may occasionally have eaten meat.

Members of the species often died during hibernation, or from fighting during breeding seasons.

Estimates suggest that they rarely lived beyond 20 years of age.

It’s believed that the cave bear died out around 24,000 years ago.

The legendary woolly mammoth first emerged around 400,000 years ago, and is one of the ice age’s most iconic creatures.

They were roughly the size of modern African elephants, growing to around 11.2 feet and 6 tons in weight. Even a newborn calf could weigh as much as 90 kilos.

Woolly mammoths were well-adapted to cold temperatures, thanks to a thick coating of fur, and short ears and tails to minimise frostbite and heat loss.

These mammoths would have co-existed with early humans, and were also hunted for food.

But they disappeared around 10,000 years ago, probably because of a combination of hunting and climate change.

The scimitar-toothed cat is an extinct genus of the sabre-toothed cat, and roamed across Britain, North and South America, Europe and Africa.

They existed for around 4million years, but became extinct around 28,000 years ago in Europe.

Scimitar-toothed cats had deadly upper canines with serrated edges for tearing through flesh.

Their body structure gave them a hyena-like appearance, primed for leaping.

But they were large at nearly four foot tall, 5.5 foot long and weighing roughly 100 to 190 kilos.

Scimitar-toothed cats were meat-eaters, and may have declined due to the disappearing of large mammals (like mammoths).

They arrived in Britain around 750,000 years ago, but moved south to warmer parts of Europe over time.

This extinct species of elephant inhabited Europe and Western Asia between 781,000 and 50,000 years ago. They reached up to 13.8 feet in height – about three feet taller than modern African elephants.

And they could weight up to 15 tonnes, making them significant bigger than the woolly mammoth.

They were named after their long tusks, and likely lived in herds.

It’s believed that straight-tusked elephants may have been hunted by early humans.

They disappeared from Britain around 120,000 years ago, and eventually became extinct on the Iberian peninsula.