By NewsroomAugust 16, 2021Conservation
No Comments 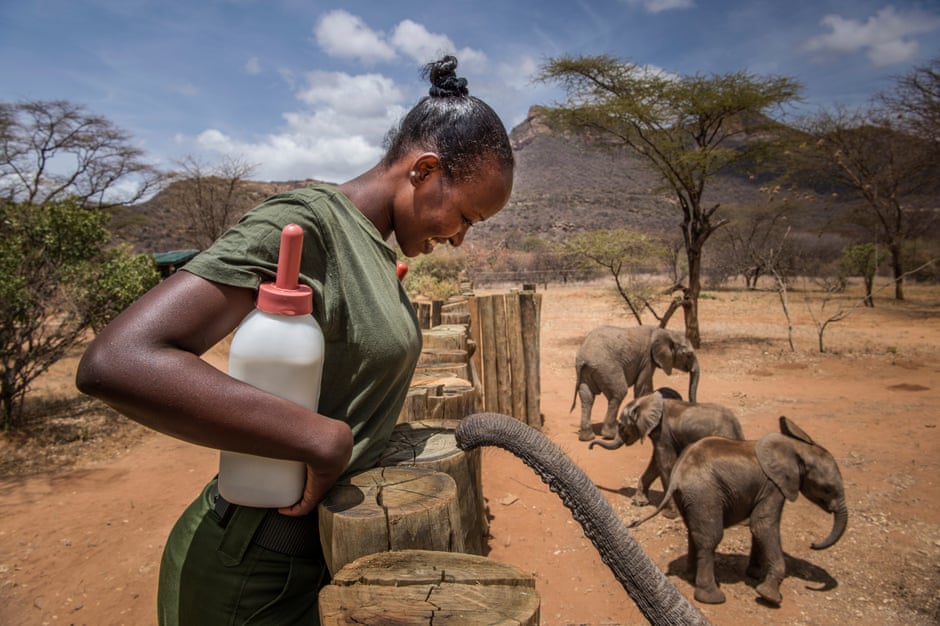 Sasha L Dorothy, one of the first Samburu women to be an elephant keeper, at feeding time in the sanctuary. Image: Ami Vitale / As originally published by The Guardian

In the mountains of northern Kenya, a Samburu community has built a sanctuary for orphaned elephants. Reteti is the first indigenously owned and run sanctuary, which rescues and raises the orphaned elephants, and has the ultimate goal of reintroducing them to the wild.

The sanctuary isn’t just about saving elephants but about breaking down stereotypes and redefining wildlife management. It is the beginning of a transformation in the way the Samburu people relate to wild animals. This oasis where orphans grow up, learning to be wild so that one day they can rejoin their herds, is as much about the people as it is about the elephants.

Mary Lengees is one of the first female elephant keepers at Reteti, and is seen comforting Suyian (top left), the sanctuary’s first resident. Suyian was rescued in September 2016 when she was just four weeks old. Meal time (bottom left and right) is a noisy, slurpy affair that takes place every three hours around the clock. Each elephant receives milk specially formulated for their particular nutritional needs.

Rimland Lemojong, pictured playing with Pokot (top right), a seven-month-old male, says: “When I was a young boy, I first looked after the kids of goats, then goats, then my parents upgraded me to care for cows. Then I went to school. I am so happy because I used to raise my family’s cows here, and now I am raising baby elephants. It’s incredible.

“When I go home, my community is asking by name how each elephant is.”

The sanctuary is empowering Samburu women such as Sasha L Dorothy, pictured above helping to feed the orphans, to be the first female elephant keepers in Africa. “Before, I was afraid of wild animals, especially elephants, but now I see them differently,” she says.

At first, the community did not think there was a place for women in the workplace. Now, the success of these keepers is unlocking new possibilities and setting a powerful example for girls hoping to pursue their dreams.

The sanctuary is also changing how many in the community relate to elephants. When people realise that they can benefit from healthy elephant populations, they are proud to take care of wildlife. Schoolchildren who have never seen an elephant before, or who were afraid of elephants, visit Reteti and experience the elephants up close. Some come away with the ambition to be a veterinarian or an elephant keeper.

The whole village of Reteti is involved, helping to provide fresh goats milk for the orphans. One of the silver linings of the pandemic came after the sanctuary could not get the expensive powdered milk they usually used and had to try experimenting using goats milk. After a lot of research, they tried a new formula, seen being prepared by Pauline Lepuyapui (above) and the survival rate among the newly arrived orphans went from 50% to 100%. It was a sustainable solution that was good for the elephants, good for the environment and gave much-needed revenue to the women in the Samburu community.

Since September 2016, the team at Reteti has rescued more than 35 elephants and returned 10 to the wild. The keepers provide round-the-clock care to the most vulnerable elephants, staying with them through the night (above). The orphans arrive at the sanctuary as a result of human-elephant conflict, drought-related issues and, in one rare case, poaching. They are nursed back to health, then sent back to the wild.

For World Elephant Day, Shaba, an award-winning short film about the sanctuary, is being made available online until 31 August.

The film is about an orphaned elephant named Shaba who arrived at the sanctuary traumatised after poachers killed her mother in front of her. It took weeks for the team at Reteti to forge a connection with her, but Shaba went on to become the matriarch of the entire orphaned herd. She became instrumental at the sanctuary, caring for each new orphan that arrived and teaching the keepers how to be better caretakers.

The proceeds from ticket sales for Shaba will go directly to support the Reteti sanctuary.