By NewsroomAugust 17, 2021Wildlife Trade
No Comments 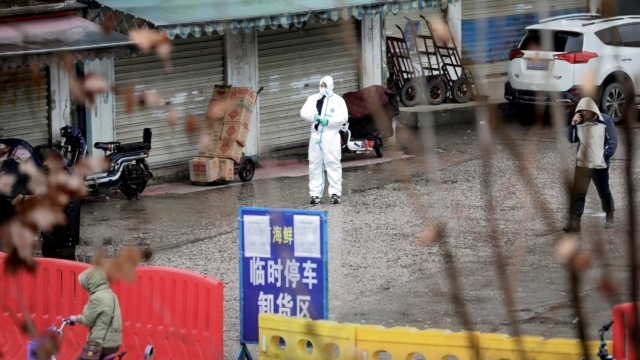 A worker in a protective suit is seen at the closed seafood market in Wuhan, China. Image: As originally published by inews

At Wuhan’s Huanan Seafood Market, fresh meat, vegetables and live wild animals such as mink, dogs and civets were available for sale and consumption. Customers could pick the animal they wanted slaughtered on the spot after purchase.

While the origins of the pandemic remain a mystery, they are widely thought to be linked to the market, and experts say conditions at such locations act as a breeding ground for diseases.

The origins of Covid-19 are still being investigated by international scientists, and are a source of much contention between China and western countries, but some warn wet markets like this remain a serious risk that could spawn future outbreaks.

Elizabeth Alderson, an international livestock consultant, told i she visited the Wuhan market in 1998 and saw caged livestock and wild animals such as bats, frogs and snakes stacked on top of each other.

“I was absolutely horrified, it was completely horrendous,” she said. “I have never seen anything quite like it before.

“I just felt wow, if I come out of here without contracting anything it would be a miracle.”

Ms Alderson said conditions may have improved since but that wet markets she has visited in other parts of Asia, South America and Africa all appear to follow the same practice of keeping animals in cramped spaces, resulting in cross contamination.

In February last year, China announced a ban on the sale and consumption of wild animals after some of the earliest infections were found in people who had visited the wildlife market in Wuhan.

“I can’t say that Covid did come from the Wuhan market but there’s a good chance that it could’ve done,” she said. “Because it’s just the general atmosphere, lots of people and animals, the ideal environment for spreading viruses.”

She was not in favour of banning wet markets, saying they act as a “big social and cultural melting pot” where people gather to socialise. She said cultural eating habits differ around the world, and that she was offered unusual dishes by locals in the 27 countries she has visited.

These included a big bowl of soup with live swimming turtles that was shared by a group in China’s rural Hunan province. “People eat whatever is around,” she said. “You can’t just destroy people’s culture. They shouldn’t be destroyed, they should be upgraded and regulated.”

Ms Alderson said better education would help market workers learn the risks of diseases and how to improve conditions. However, some are calling for a total ban on wet markets.

Abigail Penny, director of Animal Equality UK, told i  that people have become “desensitised to an animal’s suffering”. She pointed to the UN calling for a worldwide ban on wet markets, though only for wild mammals. “This is an arbitrary line, why is killing a dog any worse than a cow or a pig? We need to look closer to home as well,” she said.

“While there’s still debate over the exact origin of the coronavirus, there is certainty that our exploitation of animals has led to serious disease outbreaks in the past – including Ebola and Sars.

“If we continue exploiting animals in the ways that we do today, there is a high risk that another pandemic could come about.”

Wet markets were behind several previous outbreaks of diseases including the Sars (severe acute respiratory syndrome) outbreak in 2002-2004, which infected more than 8,000 people globally and killed 774.

Scientists found that the Sars pandemic began in Guangdong in southeast China when the virus known scientifically as SARS-CoV spread on to humans from palm civets, which had transferred the infection from cave-dwelling horseshoe bats. Covid-19, known as SARS-CoV-2, belongs to a group of genetically related coronaviruses that includes SARS-CoV and viruses found in bats.

Diana Bell, professor of conservation biology at the University of East Anglia, researched Sars in 2003 and how the wildlife trade was the source of the outbreak.

“And we said it would happen again,” she told i. “Because of the mixing of a wide variety of species held under conditions that were not welfare-friendly, to put it mildly.

“It’s that mixing of species from all over the world that is the perfect storm. And we said then we’ve got to address the trade both for biodiversity purposes and for human health. Seventeen years later, here we are.”

While she praised China for banning wildlife trade for human consumption, Professor Bell said the ban needed to expand to other countries. “We are seeing new species into the trade which weren’t being exploited before,” she said. “For example, the African pangolin weren’t in the trade 15 years ago, they are now. They are now appearing in the markets in the wildlife trade in Asia. Similarly, species that weren’t threatened (from extinction) are now.”

The World Health Organisation (WHO) is investigating the cause of the pandemic, which has claimed the lives of four million people across the globe, “so that we can be better prepared for the next one”.

It called on governments to cooperate and not use the research as “an exercise in attributing blame, finger-pointing or political point-scoring”. WHO also urged China to share the raw data from its earliest cases of coronavirus, saying on Thursday it was “vitally important” to understand the virus’s origins.