As wildlife conservationists gather to bear with the death of ‘Fausta,’ the world’s oldest female black rhino of a natural cause on Friday, Ngorongoro Conservation Area Authority (NCAA) mulls over preserving its remains for remembrance and historical purposes. That was revealed by the authority’s Principal Conservation Officer, Ms Joyce Mgaya in a telephone interview with ‘Daily News’ yesterday, adding that preserving its remains symbolised a fact that conservation campaign was not lost.

“NCAA is mulling over plans to ‘preserve’ the iconic black rhino that was first sighted in the Ngorongoro crater in 1965, while aged three years for remembrance and historical purposes,” said the NCAA officer.

The solitary female rhino died at 57 inside her sanctuary having roamed the crater freely for more than 54 years. Fausta’s health was said to have started deteriorating in 2016 after surviving several hyenas’ attacks, which left it with some wounds, though treated and put in confinement eating mostly lucerne – a perennial flowering plant in the legume fabaceae family.

Her death comes hardly a week after the NCAA marked its 60th anniversary last week with conservation efforts of such endangered animals being its priority.

In the arrangement, NCAA kept in an enclosure inside the crater to keep it safe from marauding hyena attacks. Expounding, NCAA Conservation Commissioner, Dr Fredy Manongi noted that records show that no other rhino had ever lived long as Fausta.

“Records show that Fausta lived longer than any rhino in the world and survived in the Ngorongoro, free-ranging, for more than 54 years. The second oldest rhino in the world was Sana, also a female but white one and died at 55 from South Africa,” he said.

The eastern female black rhino that was also set to have a foundation named after her, is said to have not produced a calf since 1984, but was able to live that longer because it did not face any biological and ecological stress. Such stresses include giving birth to a group of calves and overcoming frequent attacks from other animals like Hyenas and Lions which prey on them.

However, wildlife experts believe that a female black rhino can give birth to a calf that weighs approximately between 65 and 90 pounds, after every 3 years on average and its gestation period is 18 months. 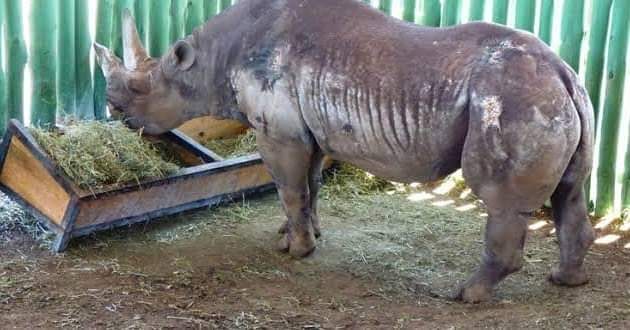 Original photo as published by Dailynews.

Fausta came into the limelight after wildlife enthusiasts in Kenya mourned the death of Solio, the country’s oldest rhino, who died at the age of 42 years, surpassing the average wild black rhino lifespan of 30-35 years while in the wild, and about 50 in confinement. In 2017, the eastern female black rhino’s monthly upkeep caused uproar in Parliament with a section of Parliament raising eyebrows on the money spent to care for it.

In response, the NCAA clarified that the government spent 1.4m/- on monthly basis to keep it not 64m/- as alleged, because of its frail health. Commenting, the then Minister for Natural Resources and Tourism, Professor Jumanne Maghembe, told the legislators that different researches and data collected on the rhino necessitated the animal to be kept because it was the only of its kinds in the country.

Statistics further show that rhinos are amongst the most poached animals in East Africa, with their population dwindling, forcing authorities to keep them in protected areas. The wild animals have over the years been hunted nearly to extinction as a result of their horns high demand as an ornament and medical values.

According to an international non-governmental organisation, World Wide Fund for Nature (WWF), rhinos once roamed many places throughout Europe, Asia, and Africa and were known to early Europeans who honoured them by further keeping them in paintings. By 1970, the rhino numbers dropped to 70,000 and today, as few as 29,000 of them remain in the wild, though only few survive outside National Parks and Reserves from poachers.

In Africa, southern white rhinos, once thought to be extinct, now live in protected sanctuaries and are classified as near threatened.