By NewsroomNovember 28, 2019Anti-poaching, Conservation
No Comments

KOTA KINABALU: WWF-Malaysia is saddened by the unfortunate loss of Sabah’s last surviving rhino, Iman, who died on Saturday after a long battle with cancer.

Iman’s death follows Tam, who died earlier this year due to kidney and liver damage.

The loss of Iman signifies the complete loss of the Sumatran rhino in Sabah. The hope of ever seeing this species in the wild is now forever gone.

Over the years, WWF-Malaysia has worked together with the government and other non-governmental organisations to help curb the extinction of the Sumatran rhinoceros in Sabah. The organisations have set up camera traps in search for rhinos, which led to the detection of Tam in 2009 and then Iman in 2014. 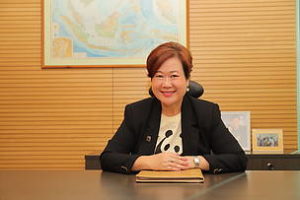 Original photo as published by The Borneo Post: Sophia Lim.

In a last bid to save the Sumatran rhino, the Sabah state government, WWF-Malaysia and the Borneo Rhino Alliance met with Indonesian government officials to outline key details in a much-needed collaboration between Malaysia and Indonesia in rhino conservation.

“Malaysia is home to some of the most iconic wildlife species in the world. This includes the Malayan tiger, the Bornean elephant, the Bornean orangutan and many more.

“While we can do little to prevent the loss of the Sumatran rhinos on our lands, we can still do so much for our other remaining species, all of whom are in danger of facing similar fates of extinction if we don’t address the threats that they are facing,” said WWF-Malaysia’s CEO, Sophia Lim.

Tackling issues such as poaching requires a concerted effort between all parties – the government, non-governmental organisations and the general public. WWF-Malaysia urges the government to further enhance the effort to eradicate poaching and act fast in bolstering efforts to preserve the remaining wildlife that we have.

“We are heartened that the Royal Malaysian Police has stepped up in collaboration with other agencies to patrol the forest, investigate and make arrest with intelligence provided by Sabah Wildlife Department, Sabah Forestry Department, the Department of Wildlife and National Parks in Peninsular Malaysia, Sarawak Forestry Corporation and Forest Department Sarawak. We have seen some successes in poachers being arrested and seizures of wildlife meat from the makers. This is but a tip of the iceberg of an illegal economy worth billions of dollars.

“Wildlife crime is not just a local problem but is part of an international wildlife trade syndicate associated with drug and human trafficking, as well as money laundering. As such, the call to set up a Wildlife Crime Bureau within the Royal Malaysian Police is indeed timely to collaborate with international agencies such as Interpol, Traffic International and regional wildlife hubs set up by WWF for Africa and Asia.

“While we must collectively address the threat of poaching, we must also work on saving the natural habitats that harbour our wildlife species. The remaining forests that we have should be retained either as protected areas for wildlife sanctuaries, or forest reserves where harvesting of timber is done in a refined and sustainable manner that allows wildlife to co-exist,” Lim stressed.

“Where our forests are fragmented, wildlife corridors should be established to enable breeding among different population groups to maintain healthy gene pools. Isolated populations inevitably face inbreeding, and in the long-term face extinction. Government needs to formulate the policies and enact regulations, scientists and conservationists to identify the locations, and private sector to set aside land for the restoration of forests into wildlife corridors.

In Peninsular Malaysia the Central Forest Spine Masterplan informs on fragmented forests that need to be connected. Likewise, the Heart of Borneo Initiative in Sabah and Sarawak calls for a corridor project connecting protected areas and forest reserves through sustainable land use.

“We need better policies and stronger legislations to regulate wildlife conservation into land uses that are administered by different agencies according to various laws. On our part, we will continue to work closely with the various government agencies to coordinate implementation efforts on the ground that will hopefully curb the loss of more wildlife,” said Lim.

“Ultimately, ensuring the survival of wildlife is a responsibility that is shared by all. It is only in collective effort that we will be able to keep our wildlife in our forest and our seas.

“Our loss of a beautiful species in Sabah is a sobering reminder that nature is not invincible, and a desperate wake up call to protect other wildlife from suffering the same fate,” she said.