Yes, more elephants being born tuskless because of poaching

By NewsroomSeptember 7, 2021Science and technology
No Comments 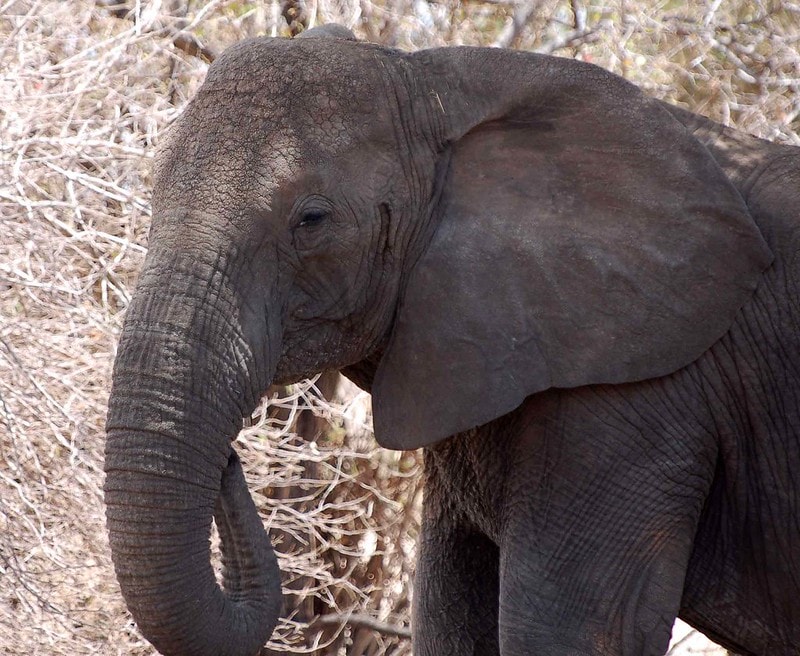 More and more elephants are being born tuskless. Image: Flickr.

African elephants are evolving without tusks as the only way to survive hunters, according to a graphic on Instagram “liked” by thousands.

Above a photo of a tuskless elephant, text reads: “In order to protect themselves from poachers, The African Elephants have been evolving without tusks. As tuckless [sic] elephants don’t look appealing to the poachers.”

The caption to the graphic references the Mozambique civil war which “saw 90% of elephants” in the country  “slaughtered and their tusks sold” to support the fighters. To survive, the Instagram post claims, elephants began to “evolve without tusks”.

Apparently the genes of these tuskless elephants were then passed on to the next generation “and there is an increase in the number of individuals that are born without tusks”.

The post cites “CBC” as the source of this information.

We tracked this to a January 2019 article by the Canadian Broadcasting Corporation, or CBC, titled “Elephants are evolving to be tuskless after decades of poaching pressure”.

The Convention on International Trade in Endangered Species of Wild Fauna and Flora, or Cites, is an international agreement between governments. It seeks to ensure that trade in specimens of wild animals and plants does not threaten the survival of the species.

In many African countries, elephants are protected under Cites Appendix I, which means that trade is only allowed under exceptional circumstances.

The International Union for Conservation of Nature (IUCN) Red List of Threatened Species also lists the African elephant as endangered, critically so for the larger savanna species.

The IUCN says elephants are threatened due to decades of being poached for their tusks and loss of habitat.

But are elephants evolving without tusks, in order to avoid being targeted by poachers? We went foraging.

The CBC’s article said that in at least two national parks in Africa – Gorongosa National Park in Mozambique and Addo Elephant National Park in South Africa – where poaching was significant, “most female elephants are now born without tusks”.

Various international publications such as the National Geographic magazine and US broadcaster CBS have in recent years also reported on this phenomenon as observed by researchers studying the African elephant.

Ryan Long, an assistant professor of wildlife sciences at the University of Idaho in the US who has studied elephants at Gorongosa, told the CBS that there are “multiple things” that could lead to this.

But, he said, “the leading hypothesis … is that there’s been a substantial amount of pressure placed on those populations by poachers”. In other words, this development was because of artificial, not natural, selection.

Michelle Henley is the co-founder, chief executive and principal researcher for Elephants Alive, an organisation with the goal of ensuring the survival of elephants and their habitats in southern Africa.

She told Africa Check that the claim about tusklessness is true “for areas where they have had a history of excessive hunting or poaching”.

Tusklessness occurs disproportionately in female elephants. According to the National Geographic, a third of younger females, who would have been born after the Mozambique war ended in 1992, did not have tusks.

“When poaching or excessive selective hunting for large ivory is prevalent, then tusklessness increases in females specifically. Usually only 2 to 4% of females born in the wild are tuskless,” Henley said.

Dr Fiona Maisels is professor of biological and environmental sciences at the University of Stirling in the UK.

“Historically, tusklessness emerges as a dominant trait when there is a long history of poaching, as the poachers select the animals with the largest tusks first, the adult males, and then when they are all gone, they just take the larger-tusked ones in general,” she told Africa Check.

Maisels, who is also an adviser to the Wildlife Conservation Society’s wildlife survey and monitoring programmes in Central Africa, directed us to studies on the effects of poaching on the evolution of elephants.

One of these, a 2016 paper by researchers at the Sefako Makgatho Health Sciences University in Pretoria, South Africa, outlined the impact of poaching on elephant herds and how the trait for tusklessness comes to the fore.

In essence, the female elephant – or cow – with the largest tusks is the most dominant.

“The longer-term effect of removing a large tusker and disturbing the social hierarchy and discipline within a herd results in tuskless females unnaturally entering the reproductive cycle.”

What of male elephants?

According to the National Geographic, tuskless males in the African elephant are extremely rare, for reasons that are yet to be understood.

The tusk size of males does become “reduced over time if bulls with large tusks are continually selected during poaching or hunting events”, Henley of Elephants Alive told Africa Check.

She gave the example of a study in Kenya that showed bulls born in 1995, after the country’s first wave of poaching, had tusks a fifth smaller than males born earlier or before an excessive poaching period.

Henley said in Asian elephant populations, there has been a long history of exposure to man, leading all females to be tuskless and also higher numbers of tuskless males.

The impact of poaching on tusklessness is further highlighted by the experience of Colin Rowles, the reserves warden at Klaserie Game Reserve, one of the largest private reserves in South Africa.

The Howard Hughes Medical Institute, a research non-profit in the US, has put together a video which explains the genetics of tusklessness in elephants.

The researchers at Sefako Makgatho Health Sciences University made an interesting observation in their 2016 paper.

The genetic shift to tusklessness, “which is undoubtedly taking place in Africa, is the only glimmer of hope for the long term survival of the [African elephant] as tuskless animals are less attractive to poachers and hunters alike”.