By NewsroomJanuary 14, 2020Anti-poaching
No Comments

Two men were on Friday arrested in the Zambezi region for the possession a pair of rhino horns, with an estimated value of N$500,000.

Zambezi regional crime investigations coordinator, deputy commissioner Evans Simasiku confirmed the arrest of the two suspects aged 34 and 36 to The Namibian today saying that the arrest came about after the police got a tip and pursued it. 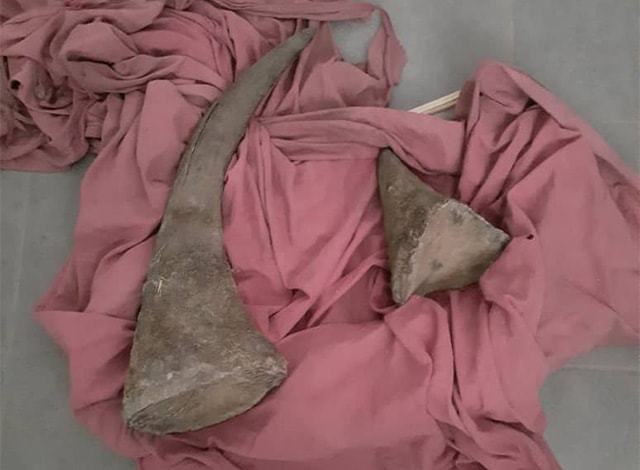 Original photo as published by The Namibian: Two Namibian men were arrested on Friday for possession of pair of rhino horns and rhino horns were confiscated.

“The suspects were arrested in the Kalumba area around 11h00. The pair of rhino horns were confiscated. They are expected to appear in the Katima Mulilo Magistrates Court on Monday,” he said.

In an unrelated matter, Simasiku noted that four Zambian men were arrested at Cheduzwe area on Friday after the police received a tip that they are suspected poachers coming from Botswana.

“However when we intercepted them we only found one 308 rifle, six rounds of 308 ammunition and five rounds of 375 rifle. They will also appear in court on Monday,” he said.