There has been no poaching at the Lewa Wildlife Conservancy in six years. This is despite the demand for the rhino horn in the Asian black markets remaining constant in the period.

Lewa head of conservation and wildlife, Geoffrey Chege said the conservancy has been devoted to protecting the rhino population and other wildlife by maintaining a sustainable natural habitat. “We are really impressed by the thriving rhino population across the landscape. The gains show that our conservation efforts are paying off,” he said.

The conservationist has steered various efforts in support of species’ recovery on Lewa, Borana and beyond for the past 15 years. 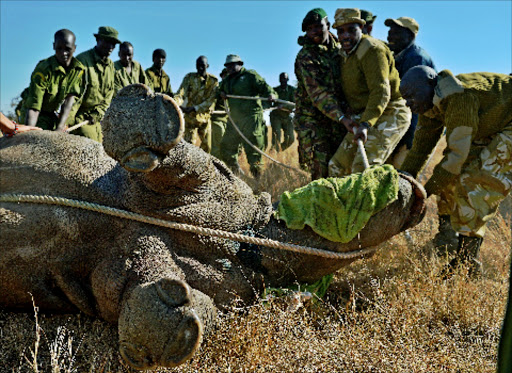 The mission of the specialist group is to promote the development and long term maintenance of viable populations of the various sub-species of African rhinos in the wild.

Membership consists of official country representatives from the main African rhino range states and other specialists.

Founded in 1995, the Lewa Conservancy spans 61,000 acres and catalyzes conservation across northern Kenya.

Lewa holds 13 per cent of Kenya’s black rhino population and 12 per cent of the world’s Grevy’s zebras.

There are currently 105 and 99 black and southern white rhinos respectively at the conservancy, with 26 rhino births recorded by September 1.

Kenya is now home to just over 760 black rhinos and 620 southern white rhinos. According to the Kenya Wildlife Service, at the end of 2018, Kenya had close to 1,400 rhinos, and the Lewa-Borana landscape is home to 13 per cent of this population.

The black rhino is classified as critically endangered by the IUCN Red List.

The latest Lewa annual wildlife census shows that in the past three years, Southern white rhinos have increased by 24 per cent. The species, though native to South Africa, is doing well in Kenya.

It is a conservation success story, having been brought back from the very brink of extinction in the 20th century.

Conservation efforts on Lewa began in the early 1980s to protect the last of black rhinos from extinction. At the time, there were only 15 individual rhinos.

Lewa head of anti-poaching, Edward Ndiritu said that the most pressing threat to the rhino’s continued survival is poaching for the illegal trade.

Ndiritu said Lewa continues to adapt to the rapid threat of poaching to protect the critically endangered species.

He attributes their success to close cooperation with the local communities, well-trained and motivated anti-poaching conservation heroes such as rangers, and the use of technology.

“We are now more than ever determined to work tirelessly and demonstrate to the world that zero poachings can be achieved. It is a fact that poaching is incredibly detrimental to the population of the critically endangered rhinos and also damage livelihood and growth of local communities,” he said.

In Asia, rhino horn is believed to be having curative values.

World Rhino Day will be marked on September 22. Rhino horn trade has been banned under the Convention on International Trade in Endangered Species (CITES) since 1977.

Over the years, rhino numbers have increased on the landscape due to successful conservation efforts.

Lewa manages its wildlife and carries out conservation work in partnership with its western neighbour, Borana Conservancy.