KHORIXAS: No rhino poaching was recorded in the past two years in communal conservancy areas of the Kunene Region, Deputy Minister of Environment and Tourism (MET), Bernadette Jagger has said.

Jagger, speaking here at the celebration of World Rhino Day on Friday, said this is due to solid efforts by the Namibian Police, community members in the communal conservancies and rhino rangers.

The Kunene Region has the most freely roaming rhinos amongst communities in the country, she said.

To turn the tide on wildlife poaching and trafficking, the government has been working in partnership with the Government of the United States of America (USA) to combat poaching and illegal wildlife trade, the deputy minister further added.

Rhinos are one of Namibia’s most endangered species and these animals bring in revenue from tourism that contributes to the country’s development, she observed. 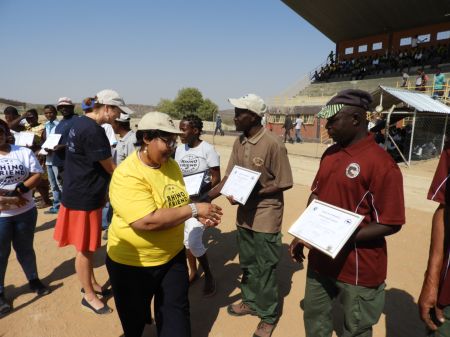 MET is busy revising the National Strategy on Wildlife Protection and Law Enforcement and the revised strategy will respond to new challenges posed by poaching and illegal trade in wildlife.

In recent years, Namibia and the Southern African Development Community have experienced a surge in wildlife crime and illegal trafficking of wild animals – with over 9 000 African rhinos poached between 2007 and 2018.

Also speaking at the event, US Ambassador to Namibia Lisa Johnson said that wildlife trafficking is a multi-billion-dollar illicit business that is decimating Africa’s iconic wildlife population such as black and white rhino.

Johnson noted that in Namibia, wildlife tourism is an increasingly important and growing industry that benefits both communities and the national economy.

She added that one of the successes thus far by the two governments is the promotion of community pride, combined with awareness creation around wildlife crime and this has proven to be the key in mobilising communities in the fight against poaching and wildlife trafficking.

At the event, about 25 rhino rangers that are in the field for over 15 years were awarded with certificates of appreciation.